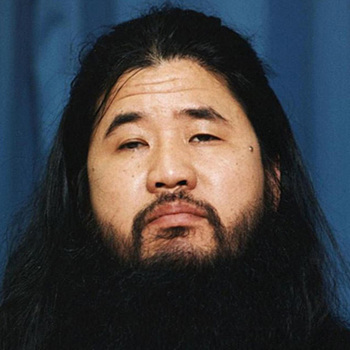 Even though Shoko Asahara and 13 of his followers have been found guilty of multiple homicides and sentenced to hang, the cults still are active and considered extremely dangerous by the Japanese and U. S. governments.

Asahara, who seemed to have the charisma to lead hundreds of professional doctors, lawyers and other highly educated people into his strange sect of killers, declared himself to be the risen Christ, Japan’s only fully enlightened master and the “Lamb of God.”

To give you some idea about how nutty his cult doctrines were, he published a book in which he drafted his own interpretations of Indian and Tibetan Buddhism, Hinduism, the Book of Revelation, Yoga and the writings of Nostradamus and took the Indian god Shiva as the cult’s primary image of worship.

The name Aum Shinrikyo is translated to mean “Supreme Truth” in English.

The cult had its origins to a small yoga and meditation class Asahara was offering in his Tokyo apartment in 1984. The class grew in popularity and began attracting students from Japan’s elite universities. It received the official status as a religious organization in 1989.

Shinrikyo taught a doomsday prophecy. He said the United States would launch World War III with an attack on Japan. The war would culminate in a nuclear Armageddon that would kill all humanity except for the elite few who followed Aum. He perceived dark conspiracies involving the Jews, the Freemasons, the Dutch, the English Royal Family and rival Japanese religions.

The group practiced holding cult members against their will, forcing them to donate money and extortion. The cult first operated a successful computer business but expanded to trafficking in illegal narcotics and weapons, and finally manufacturing chemical and biological weapons.

Cult members later told how Aum used LSD and other hallucinogens, and sleep and food deprivation to keep his flock in line. Some members believed in Aum, while others were afraid to try to leave the organization.

The first known murder occurred in 1989 when a cult member who attempted to leave the group ended up dead. At about the same time, a lawyer, Tsutsumi Sakamoto, who was threatening a lawsuit against the cult, disappeared with his wife and child. Their bodies were found in 1995.

In 1992 Kiyohide Hayakawa, the organization's "construction minister" published a treatise: Principles of a Citizen's Utopia, which many saw as a declaration of war against Japan. At about that time Hayakawa began making trips to Russia and buying military hardware. By 1994 the cult was secretly manufacturing saran and VX gas, both deadly nerve agents.

On June 27, 1994, Aum Shinrikuyo used a converted refrigerator truck to release a cloud of saran in Matsumoto, Japan. The gas attack was directed over the homes of judges who were overseeing litigation involving a real-estate dispute against the cult. Seven people died and one woman was left comatose in the attack.

Police were closing in on the cult when Aum and four other members released saran gas from plastic bags into the Tokyo subway system. The attack killed 13 and left over 6,300 passengers wounded.

In the weeks after the subway attack the cult literally battled with the police, at one time attempting to launch a cyanide attack on a major concourse. Also the head of the National Police Agency, Takaji Kunimatsu, was gunned down in front of his home.

Asahara was captured about two months later, hiding in a wall. Eventually 484 Aum members were arrested and 188 of them were indicted. The five involved in the subway gas attack were sentenced to death. Three ranking cult members remain at large.

Asahara recently lost his final appeal to the Supreme Court and is in prison, awaiting his hanging at the time of this writing.