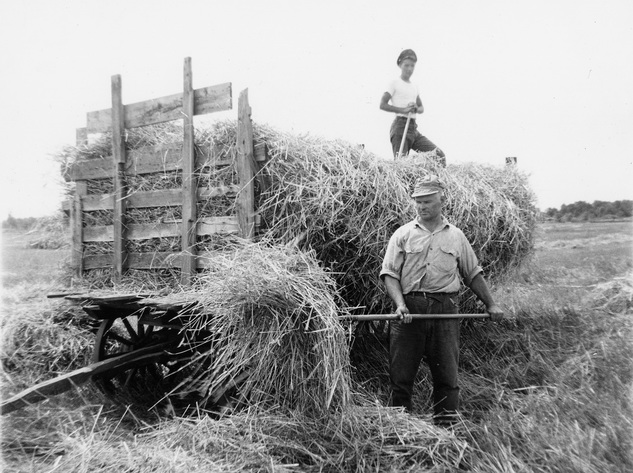 Ma and Pa Aren't On the Farm Anymore

I grew up during a time when families could make a good living on farms no larger than 160-acres. We lived on such a farm in Michigan. Those were the days when many dairy farmers milked their cows by hand and families dared to drink "raw" non-pasteurized milk laced with real cream.

My father was a modern thinker who used our place as a hobby farm. He experimented with new chemicals and hired the owner of a combine to harvest his crops. Our neighbors, many of them first or second generation German, Dutch or Polish immigrants, still preferred the old way of doing things. They fertilized with cow manure. At harvest time they cut their grain, stacked it in shocks in the field, and thrashed. While I was too young to participate in the heavy work, I was often recruited to operate the tractor and wagon as the workers made their rounds, loading the shocks. I then would pull the loaded wagon to the thrashing machine, powered by an old John Deere tractor, operating somewhere near the barn.

We could work a farm then with a tractor just large enough to pull a two-bottom plow. I recall spending most of a day pulling a harrow over a 40-acre plot of ground, or perhaps a day or two getting that same field plowed. If we could harvest 30 bushels of wheat from an acre, we thought we had a good crop. I remember the year my father, who was a chemist by profession, experimented with a high-nitrogen byproduct from the factory where he worked. He tried it as a fertilizer on strips across his wheat field. That year we amazed our neighbors when the experimental part of the field yielded 50 bushels of grain to the acre. Today's farmer hangs his head if he brings in anything less than 60 bushels from that same acre.

When we plowed in the spring, we always watched for killdeer. These delightful birds laid their eggs in the weeds on the surface of the ground. It was not unusual for us to leave an unplowed island in the middle of our field because a killdeer nested there.

I remember the rich smell of the freshly turned earth. I remember the satisfying feeling I had when a day's work was finished and I walked to the house, my face and clothes covered in dirt (no air conditioned cabs on that tractor), for a bath and a good hearty supper. How grand it was to lie in my bed, next to an open window, listening to the frogs, loons and other creatures of the night. It was as if they were singing a lullaby as I drifted off to sleep.

Things have changed in a big way since I left the farm. During my years on various Michigan newspapers, I never forgot the farm life. I watched the small family farms disappear as they were bought by the more prosperous area farmers. These new farm operators, forced by tighter pricing, reduced profits and rising operating costs, turned farming into a highly mechanized business. Only the best and most aggressive operators survived. They bought land, expanded to hundreds and sometimes thousands of acres, tore down fences, cut down trees, bulldozed the little ponds, and farmed with massive machines capable of plowing, conditioning and planting a 200-acre field in a single afternoon. I am sure they never stopped for a killdeer nest. They were too busy to care. They seemed to be in a race against the wolf, which always threatened to call at their door.

Instead of spending a day on a tractor lovingly cultivating their crops, I watched these farmers hire crop dusters to spray pesticides and weed killers from the sky. Rather than go the old organic route, "modern farmers" switched to chemicals that killed bugs and weeds and saved hours of labor.

Dairy, beef, poultry and hog production moved from having a few animals in the barn to massive buildings and feedlots. Today thousands of animals live out their brief lives eating foods laced with chemicals designed to make them grow fast so they can be butchered younger. Farming is no longer a way of life. It is a food factory.
With farmers racing into new and innovative ideas designed to grow more crops at lower cost, it should not be surprising that they now find themselves caught up in a great bio-tech dilemma. Not only are they battling new and unexpected diseases, they are facing a problem with the new genetically modified seed that "accidentally" spreads pollen all over the American farmland.

People in Japan and Europe don't want to eat many American grown crops the DNA is crossed with toxic chemicals that they fear might make them sick. Since the Fukushima disaster, people in the U.S., Europe and elsewhere are leery about eating food from Japan.

Then there are the big food and meat recalls because of the new super bugs like salmonella, Listeria and E-coli. People are getting sick and dying from eating foods that once were considered safe. The food is poisoned by careless handling at the large factory farms and in the massive food processing centers.

Yet another innovative practice by meat producers . . . to lace their animals with growth hormones and antibiotics to reduce losses . . . is coming back to haunt us. Medical people are expressing alarm that the agricultural practices are helping bacteria become immune to the existing antibiotics. Not only that, we now are beginning to find these antibiotics and other chemicals mixed in with the water we drink from our wells. What we are doing to our livestock we also may be doing to our own bodies. The bottom line to all of this is that we may be creating new super bugs on our farms.

Where is all this leading? There seems to be a general insanity linked to food production, just as exists in most other forms of modern industry. Nobody seems to care for the ecology or the public health as long as money can be made. Farmers don't have large smoke stacks spewing massive clouds of toxins in the air but what they are doing to our planet is equally as bad to the planet and human health as the other big industries. They are busy dumping tons of dangerous chemicals into the mouths of their livestock and on the ground they work. This stuff is getting into our food chain and into the ground and water supplies.

Modern farming practices have depleted the soil of its nutrients so the food we grow no longer supplies those important nutrients to our bodies. Consequently, we are forced to take a variety of vitamins and minerals to compensate, just to stay healthy.

There presently exist giant dead zones in the seas. The best known one is a large area in the Gulf of Mexico a few miles from the point where the Mississippi River empties, where nothing lives. The toxic chemicals leaching from the farms of America are washing down this great river and collecting there. Of course the massive spill of crude oil from the Deepwater Horizon oil platform in 2010 has taken its toll. In recent years more dead zones like the one in the gulf have been discovered. They are like giant cancer sores that are quickly destroying all sea life on the planet.

This should be a warning that we need to change our ways. Because the world is overpopulated and the supplies of food are dwindling, we can be assured that nothing is going to change; at least for a while. But global warming and its subsequent “climate change” is going to force change. Farms can no longer produce the quantity or quality of food that they once could. Starvation is a major threat especially among the poor people of the world.
The chickens are already beginning to come home to roost. The amount of food harvested, its quality, and the high cost of trucking it to our local stores is forcing the price of everything we eat through the roof. More and more people around the world are going hungry. And what they do have to eat is far from healthy.