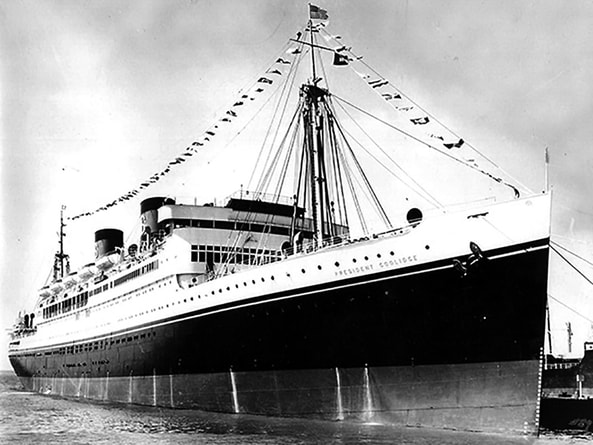 Among the many fine ships lost during World War II was the SS. President Coolidge, a fine liner sunk by mines while serving as a troop ship at Vanuatu, New Hebrides, in October, 1942. The 653-foot-long wreck today lies on its side in shallow water where it serves as a popular recreational dive site.

The Coolidge and her sister ship, SS President Hoover, were launched in 1931 and 1930 respectively for the Dollar Steamship Lines. The Coolidge later was owned and operated by the American President Lines until its conversion as a troop ship in 1941. Its route as a pleasure vessel took it across the Pacific Ocean from San Francisco to Asian ports of call that included Kobe, Shanghai and Manila. Thus it was impossible for this ship to escape involvement in that ugly war.

Both the Coolidge and Hoover were noted as the largest merchant ships built in the United States at the time they were launched at the Newport News Shipbuilding and Drydock Company in Virginia. Both vessels were designed to serve holiday passengers seeking travel to the Far East. The vessels offered spacious staterooms and lounges, private telephones, two saltwater swimming pools, a barber shop, beauty salon, gymnasium and even a soda fountain.

The President Hoover did not last long. Caught in a typhoon it was driven aground on the coast of Taiwan in December, 1937 and was declared a total loss.

As war clouds were building over Asia and Europe in 1940 the President Coolidge became involved in evacuating US citizens from Hong Kong and other parts of East Asia. Then the US War Department used the liner for voyages between the US and Honolulu and Manila. By June of 1941 the Coolidge was officially converted for use as a troopship. After the Japanese attack on Pearl Harbor, the President Coolidge evacuated critically injured naval personnel from Hawaii to San Francisco.

The ship then was included in the first large convoy of ships and liners carrying troops, supplies, ammunition and weapons into the Southwest Pacific war zone.

Her final voyage, under the command of Captain Henry Nelson, sent the Coolidge from San Francisco into New Caledonia and the New Hebrides laden with troops and also critical supplies needed for a planned deployment of troops into the Pacific Theater. The supplies also included 591 pounds of quinine; the entire stock of quinine held by the US at that time.

As the liner approached its assigned port at Espiritu Santo it struck two mines at the harbor entrance. Captain Nelson attempted to beach his ship but struck a coral reef and ran the ship aground. He then ordered troops to abandon ship. Consequently 5,340 men got safely ashore, many of them walking to landfall. The big ship then listed heavily to port, sank and slid down a slope into deeper water. 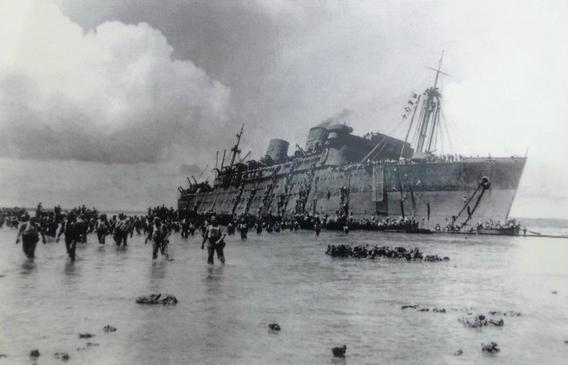 There were only two deaths. Fireman Robert Reid was working in the engine room and was hit by the first mine blast. Captain Elwood Euart, 103rd Field Artillery Regiment, went back on the wreck after hearing that men were still trapped in the infirmary. He successfully rescued those men but in doing so he became trapped and went down with the ship. He was awarded the Distinguished Service Cross for his heroism.

A Court of Inquiry later held aboard the destroyer tender USS Whitney acquitted Captain Nelson of wrongdoing. It was found that Merchant Marine ships were not given all available tactical information, including the placement of mines, when ordered to New Caldonia.

After the war some parts of the ship were salvaged. Vanuatu then gained its independence from France and Britain in 1980 and soon declared that no further salvage or recovery of material would be allowed from the President Coolidge. The wreck, which lies in shallow waters, has become among the most popular recreational dive sites in the world. It is filled with guns, cannons, jeeps, trucks and war supplies.