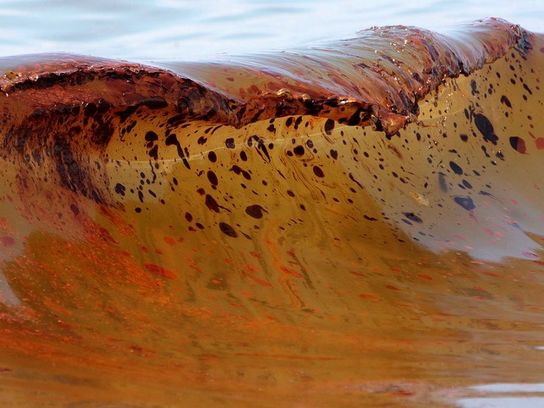 The world's oceans are vast and deep so it has taken a few years for all that water to absorb the heat from our warming planet. But now that the water temperatures are spiking, the effects are being felt in a variety of unexpected ways.

The most dramatic effect is being experienced in what meteorologists are dubbing "weather change." Indeed, the mild weather patterns we have long known and loved are disappearing. In their place we are experiencing intense storms or intense drought. When the storms occur they bring floods, high destructive winds and rains so intense the world streams, gully's and rivers are not large enough to handle the water. Winter snows are being measured by feet instead of inches.

Other more subtle things are happening in our oceans.

Unusually high levels of ozone measured in the warm calm skies over the western part of the United States since 2014 has been traced to what researcher Dan Jaffe is calling a "blob" of warm water in the Pacific Ocean.

Jaffe, an atmospheric science at the University of Washington Bothell, was quoted in Live Science as stating the warmer waters (ranging from two to seven degrees Fahrenheit higher than average) were measured from Alaska to Santa Barbara, California. He said after he and his colleagues noticed that ozone levels at Mount Bachelor Observatory, Oregon, were spiking, they measured ozone levels all along the coast. Sure enough, they found highly elevated levels of ozone throughout the region.

Excess ozone has an effect on human lungs. It causes inflammation of airways and various respiratory problems associated with asthma, throat irritation, and shortness of breath.

Jaffe said his team is finding that sunlight and high temperatures fuel faster ozone formation in cities where the pollutants from cars go through a complicated chemical reaction. Thus they say the "blob" of hot water forming in the Pacific Ocean is causing dangerous levels of ozone to form throughout the Western United States.

Yet another startling finding by German oceanographer Sunke Schmidtko and two of his associates from the GEOMAR Helmholtz Centre for Ocean Research, has found that the oxygen content of the world oceans is in decline.

In a paper published in the journal Nature, the team noted a worldwide decline of more than two percent has been detected between 1960 and 2010. The largest overall volume of oxygen was lost in the Pacific. As a percentage, the paper noted that the decline was sharpest in the Arctic Ocean.

The oxygen loss is a reflection of the delicate balance that has existed for thousands of years throughout the planet. The oceans absorb oxygen and other natural gases from the atmosphere. But warmer water takes in less oxygen. And as the surface water warms there is less stratification of the waters so the existing oxygen at the surface fails to go deep. This is affecting the sea life that lives deep in the ocean waters.

Matthew Long, oceanographer for the National Center for Atmospheric Research, noted that the new research observing ocean oxygen trends on a global scale are troubling. "It is alarming to see this signal begin to emerge clearly in the observational data," he said.

And still a third new study, just published in the journal Nature Ecology and Evolution, had found that the toxins found in some of the most polluted waters on the planet also are appearing in the very deepest parts of the oceans.

Researchers from Newcastle University, the University of Aberdeen and the James Hutton Institute used deep-sea landers to collect samples of small organisms living in the deepest trenches of both the North and South Pacific Ocean and found high levels of toxic PCB's and other organic pollutants in small crustaceans and amphipods.

Dr. Alan Jamieson, lead author of the study, noted that in the Mariana trench alone, the PCB concentrations were about 50 times greater than levels found in crabs living in the most polluted waterways in China.
​
"That we found such extraordinary levels of these pollutants in one of the most remote and inaccessible habitats on earth really brings home the long term, devastating impact that mankind is having on this planet," Jamieson said.