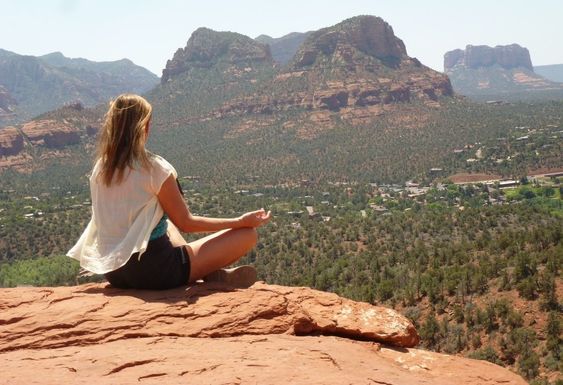 During the brief time we lived there, we found Sedona to be a magnificent and spiritual Mecca, filled with people all seeking in their own way to link with the earth and with one another. It was our destiny to capture the wonder of that place. We walked among wizards, witches, psychics, energy vampires and crystal wielding new age characters all accepting one another in spite of the other guy's strange dress, personal belief or behavior. With five different vortexes of energy all spewing out of the rocks around us, it should not be surprising that it was a place of magic, haunting and a lot of other strange goings on. We loved Sedona.

We found ourselves living with a variety of spiritual energies. Our landlord, Bob, was operating a mystical con game in which he accepted money for "healing" from a mystery light that he passed over the body. An examination of his wonderful light revealed to me that it was a harmless Tesla coil, with various colored filaments covering it. If any healing was done in Bob's office, it was the result of the individual's willingness to believe in the power of that light, and then use that belief to heal his or herself. They turned to the god within.

Bob and his wife also practiced the black arts. They seemed to be more skilled at this than they were at medicine. As soon as they knew we were on to them, they began sending their energy into our humble home. It was Indian witchcraft all over again, complete with daily hexes and spells. After living with the Navajo this new barrage didn't seem nearly as intimidating as it had been on the reservation. We knew how to detect it and send it back to the point of its origin.

It meant, however, that we had to be on our guard all of the time. Aaron said he used his skills to station an invisible guard at our door to keep away harmful energies. Whether it did any good I cannot say, but it gave us a strange sense of security knowing it was there. But we found ourselves under constant attack every time we left the house, however. In fact, if we failed to ground ourselves, we usually returned from a simple trip to the grocery store so drained of energy, we felt like going directly to bed.

We learned that vampires really exist. Instead of drinking your blood, these characters use mental powers to drain the natural energies of other people around them. In Sedona, the energy vampires were all around us, constantly draining us. To combat it, we simply took a moment to think of elongated tubes stretching out from our bodies into the sky, and from our feet deep into the core of the earth. Then we thought of our feet as roots stretching deep toward the heart of the planet. This mental exercise grounded us to the earth, and prevented vampires from stealing our energy. After leaving Sedona, we discovered that the world is filled with vampires, only they just don't seem to collect in such large numbers in a single place. I might run into about one or two a day if I am frequenting stores or working among large numbers of people. Most people go through life unaware of just why they become so extremely tired while in crowds. It isn't what we do. It is the energy thieves we come in contact with. While learning to combat energy vampires, we also learned how they do it. Like other forms of witchcraft that come our way, these little attacks can easily be reversed. A mere thought used in a special way can literally drain an unsuspecting victim, and give you a mid-day energy boost that surpasses a good strong cup of coffee.

Something I have never completely understood was an event I call the night of the wolves. As mentioned earlier we had a large and very clear crystal that Doris displayed on the living room coffee table in a cut glass dish filled with sea salt. One night I was awakened by some unknown force, and found myself wandering around our little cabin in my pajamas. As I stood in the living room, wondering why I was so wide-awake in the middle of the night, I noticed the crystal was glowing. It was a faint glow at first, but the light began to get brighter in its intensity until it virtually cast an eerie light throughout the room. I thought perhaps it was moonlight, shining through one of the windows, but when I looked out I saw that there was no moon in that part of the sky.

As I stood, perplexed by the mystery light, I heard the howl of a wolf. It was close. In fact, the howl seemed to be right outside our front door, which opened into the living room. I stood frozen by the sound. Then there were more howls. It was if there was a pack of wolves at our door, all of them howling. It was one of the most eerie things that I have ever experienced. I didn't want to open the door, but when peering out of the large picture window, I failed to see anything in the darkness. I woke my wife Doris and together we listened to the wolves howl. After a while the howling ceased as suddenly as it began. When I walked back out into the living room, the crystal was no longer glowing.

Wolves, by the way, were once a native to Arizona, but they had reportedly been killed off by the cattle ranchers. Everybody said there were no wolves left in the state. Whatever was going on outside our door was about as strange as the white wolf Doris saw running across the yard on the Navajo reservation a few months prior to that.

Then there were the ghosts.

During the few months we lived in the cottage on the Snebley estate, we became aware that we shared our home with at least two spirits.

The antics of a mischievous young boy were the first to get our attention. I think I became aware of him when he started moving the cassettes from my stereo. When Doris started her job, she had a few weeks of training during a regular day shift. I got into a work routine of my own during that time. Because it was the largest and most spacious room in the house, I set up my work station in one corner of the kitchen. I had my computer, telephone, and all of my books and file boxes stacked around me. After seeing her off in the morning, I usually slipped a cassette of recorded music in my portable stereo, which I placed on the kitchen table, and enjoyed a concert while doing the breakfast dishes. After that, I liked to get in my daily walk along the road that wound up the side of the mountain just behind our home before the day got too hot. When I returned to the house, I sat down to a session of writing.

It was not long after I established this routine that I discovered the cassette I was sure I placed in the stereo was missing. The empty box I kept it in was still lying on the table where I placed it but the cassette was not to be found. It contained music I was particularly fond of, so I conducted an extensive search, but never found it.

After this, Doris began missing things. They were little things, like a comb, or a pen, fingernail clippers, or other objects left in a particular place, only to have them turn up missing. Sometimes she would find them lying in some other unexpected part of the house. It was not long before we were quite sure we had an invisible practical joker living with us. Doris asked the board about this and learned that he was a young son of a farm worker, once employed by the Snebley family and who lived in the cottage. He died in a tragic farm accident. He was crushed when he fell under the wheels of a farm tractor. This story was later confirmed by Bob, who said they also had a ghost living with them in the main house. This was the spirit of the Snebley's daughter, who was killed after falling off a horse, and dragged after her foot became tangled in the stirrup. We learned to live with our ghost.

One day we had an interesting visitor. She was a psychic from Phoenix, well known for her talents in helping police track missing children and solve murder cases. We later learned that her abilities became the basis for the popular television series, Medium. This woman apparently had some business with Bob, heard about us and decided that she wanted to meet us. To this day, I am not sure just why we were singled out, but we were. When she came to our door we invited her in and we talked for a while in our living room.

It was not long after she arrived that the woman announced that our home was quite haunted. We said we knew that we had a little boy living in our kitchen. She said we not only had the spirit of a boy, but also that of an older man living in our living room. She said he was leaning against a wall, laughing a lot as he watched our activities. Both spirits seemed to enjoy sharing the place with us.

The woman also asked me if I knew that I had a golden little dog following me around. This surprised me. It seems that our dog came home with me from the veterinarian's office after all.
​
When she found out that I was a retired journalist and still actively writing, we also discussed the possibility of writing some stories about this woman’s exploits with the police. She liked the idea and we tentatively agreed to meet again. Because of circumstances this meeting never happened and we never saw her again.