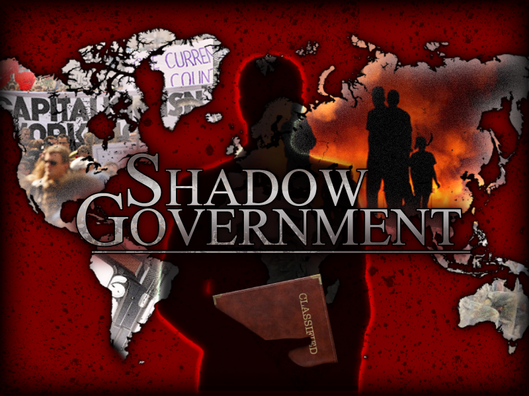 Is There A Shadow Government?

Those of us who have been around awhile remember some bad times when the world was at war with itself. We also remember moments when world leaders spoke with brilliant clarity, inspiring followers to share in national and sometimes international pride for jobs well-done.

We wept when these great figures of potential leadership fell at the sound of an assassin’s bullet, or were seized by militant forces and silenced behind prison walls. There was always a sense that something was amiss when great leaders like John F. Kennedy, the Rev. Martin Luther King and Nelson Mandela fell. It was as if secret powers behind the veil were pulling strings to shape world events and we as average citizens of the world could do nothing to stop them.

As much as we wished for world peace, we never seemed to reach a point where we could all reach out to one another across national borders and achieve a state of international brotherhood. There were always the barriers of religious, racial and political ideologies that kept us divided and unwilling to trust one another. There were always the radical dictators like Stalin, Hitler and Amin who rose up as spoilers of the great dreams we shared.

We forgot that the god of our creation exists within us all. We forgot and continue to forget that we have the power by mere collective thought to change the world and make things right. But the chaos in play around us causes confusion. We find ourselves in such a state that we cannot even agree on what is right or wrong.

Back in the Seventh and Eighteenth Centuries, when Europeans were fleeing religious and sovereign dictatorships and establishing what they hoped would be “a perfect union” in North America, a band of rebels carefully hammered out a plan for a Republic that they believed would lead to something better. Thus was born the United States, which briefly became a beacon of light for the entire world.

Now, after a bloody Civil War within our boundaries, and involvement in two great world wars and constant warfare in nearly every corner of the world, our banner does not appear as great as it once did. Our place in the world, though domineering, now appears tarnished. In truth, we are hated by millions because of the secret things we have been doing in the names of big business and military might.

What happened to the nation we were so proud of even as late as 1976, when we celebrated our two hundredth birthday? How could it all have collapsed so quickly?
There are theories being expounded by some who are daring to project their ideas under pseudo-identities on the World Wide Web. They are projecting the existence of a shadow government that is, and may have been controlling us for hundreds of years. Some say this government may be a band of aliens from another world. Others say it is a powerful group of bankers operating under a world banking system headquartered in Europe. Still others suggest that the British Crown may still be operating behind the scenes and that Americans never really won the Revolutionary War.

What proofs do these contemporary conspiracy theorists have? When we examine their arguments many of them offer strong evidence that supports their ideas. Others simply project interesting perspectives based on ancient stories and myths that are supported only by archaeological and historical discoveries.
​
In the days to come we want to present a few of the more interesting theories, define their proofs as best as we can, and let you decide the validity of their arguments. While they all appear to look at events from a different perspective, they all agree that some kind of secret organization seems to be in control of world events. And it isn’t God.