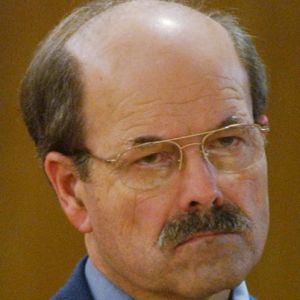 People who know him never guessed that Dennis Raider was an American serial killer. He was a balding, average looking family man, the father of two children. His occupation was the installation of burglar alarms in private homes in and around Wichita, Kansas. He was active in his church. He spent his free time breaking into the homes, many of the very ones he worked in, overpowering his victims, binding and then murdering them.

Raider wrote taunting letters to the police using the pen-name BTK, which he said stood for “Bind, Torture, Kill.” He is believed to have murdered at least 10 victims between 1974 and 1991.

Born in Pittsburg, Kansas in 1945, Rader grew up in the Wichita area. By his own admission, Radar enjoyed torturing animals as a child. He also had a secret sex fetish for women’s underwear. He stole the under panties and wore them under his regular clothes.
He didn’t start killing people until he was 32. Before that he spent four years in the U.S. Air Force, then he attended Wichita State University where he graduated in 1979 with a bachelor’s degree in administration of justice. In the meantime he married Paula Dietz in 1971 and they had two children.

Once he began his killing spree, Rader plunged into his life of crime with gusto. He entered the Wichita home of Joseph and Julie Otero on January 15, 1974 and murdered both Mr. and Mrs. Otero and their two children, Joseph Jr., nine, and 11-year-old Josephine. Josephine was found hanging by the neck from a drain pipe. The others were strangled and suffocated with plastic bags over their heads.

The story gained national attention but Rader seemed to want fame for what he had done. He slipped an unsigned letter into a public library book in which he admitted killing the Otero family. In the letter he wrote: “It’s hard to control myself. You probably call me ‘psychotic with sexual perversion hang-up.” He described the urge to kill as a monster inside of him. He also identified himself as the "BTK killer" in the letter.

He struck again in March, 1977, when he entered the home of Shirley Vian, locked her children in the bathroom, and strangled Shirley. Later that same year he strangled Nancy Fox in her home and then called the police to report what he had done. Later he sent a letter to the Wichita television station claiming responsibility for killing Vian, Fox and a third unknown victim. Police never identified the third alleged victim.

In April, 1979, an elderly Wichita woman returned home to find that the BTK Killer had been in her house, waiting for her to come home. Because she was late, he lost his patience and left, thus sparing her life. But he left his note.

Several years passed after this. Then on April 27, 1985, Rader killed his neighbor, Marine Hedge. He left her body on the side of a road. The following year he killed Vicki Wegerle in her home, and then in January, 1991, he killed his final victim, Dolores Davis.

As the years passed, technology was getting better and better. When the media posted news stories marking the thirtieth anniversary of the Otero murders, Rader couldn’t resist sending letters to the media reminding them of his many crimes. He left packages with clues around town. One package contained a computer disk.

Police were able to track that disk to Rader’s church, where he was president of the church council. This was the clue that broke the case. Rader was arrested on February 25, 2005, and charged with 10 counts of first degree murder. He immediately confessed to the crimes.

The arrest stunned the community. The people who knew and worked with Rader could not believe his story. His wife divorced him.
​
Rader is currently serving ten consecutive life sentences in the El Dorado Correctional Facility.