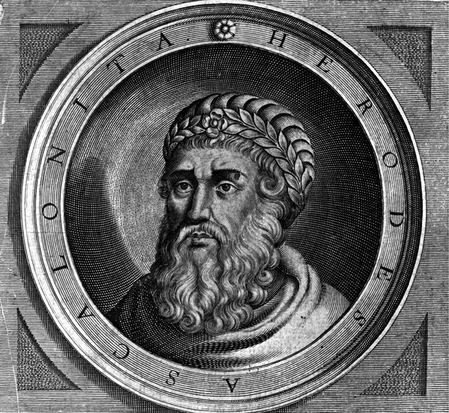 King Herod – Did He Try To Kill Baby Jesus?

The New Testament accuses the Judea King Herod the Great of ordering the Massacre of the Innocents because he heard that Jesus, the “King of the Jews” was born.

As the Bible story is told, the magi visited Herod to proclaim the birth of the “King of the Jews” they stirred up big trouble. The magi were then warned in a dream that Herod wouldn't have anyone ursurp his throne and planned to kill Jesus. Indeed Herod ordered the slaughter of all male children aged two and under in and around the City of Bethlehem. Mary and Joseph fled with the child to Egypt where they hid out until Herod’s death.

That is the well-known Bible story which has been a dark part of the Christmas story. But historians have researched the Roman records and text from that period and find no reference to a mass killing of children at Bethlehem. Because the story is in the Bible, various artists over the years have painted their “visions” of the so-called “Slaughter of the Innocents.” But in historical fact, researchers doubt if this ever happened.

This does not mean that Herod was a nice guy. He was a Roman client king of Judea at the time Jesus was reportedly born. Herod was feared because he suffered from extreme paranoia. He earned a reputation as a madman who had no problem slaughtering the people around him.

Jewish historian Josephus recorded that during his 30-year reign Herod murdered his own family and many rabbis. He was willing to go to great lengths and commit any crime to gratify his personal ambition. He levied heavy taxes on the people to pay for colossal building projects that included the expansion of the Second Temple in Jerusalem, the fortresses at Masada and Herodium the the port at Caesarea Maritima.

Josephus recorded details about the life of Herod, but there is no mention of a slaughter of young children.

Herod was born in about 71 or 72 BC. His father, Antipater, was the chief minister of Judea who had risen to power serving Pompey the Great. He was an Edomite whose ancestors had converted to Judiasm so Herod was raised as a Jew. After Pompey conquered Jerusalem in 63 BC and Judea fell under Roman rule, Herod and his brother, Phasael were named joint governors of the region by Mark Antony, the Roman ruler. They served under Hyrcanus II.

During the political turmoil that followed, Hyrcanus was removed from office and Phasael was arrested and imprisoned. He committed suicide rather than be publically shamed. The Roman Senate then appointed Herod as King of the Jews in about 39 BC.

In his rise to power, Herod married Mariamne, the granddaughter of Hyrcanus, and banished his own wife Doris and their son, Antipater. It was a political marriage, designed to help secure his claim to throne. He later murdered Mariamne and three of their children.

It should be noted that Herod had five wives and fathered an estimated 14 children during his years in power.

King Herod felt insecure in his position. He was unpopular among the Jewish people because he lacked a proper ancestry to claim the office. He needed a priest who would not rival him in power. Thus he went to great extremes to seize the throne and keep it. This involved his marriage to Mariamne and his constant battles with religious leaders that led to the assassinations of several Rabbis.

During his reign, Herod established a secret police to monitor and report on the general public. His opponents were removed by force. He was surrounded by a bodyguard of 2,000 soldiers.

Because of Herod's extreme paranoia, it was easy to believe in a story concerning the decision to murder the children of Bethleham after astrologers announced that a child who would be "King of the Jews" was born there.

One reason historians find it hard to accept the "Massacre of the Innocence" story is that Herod was nearing the end of his reign at the time Jesus was born. He was probably already suffering from the chronic kidney disease that killed him about three or four years after the alleged birth of Jesus.

Josephus wrote that Herod was so concerned that no one would mourn his death that he commanded a group of distinguished men to come to Jericho to be slaughtered at the time of his burial. He wanted to generate displays of grief throughout the region. His son, Archelaus, and sister, Salome, did not carry out his final wish, however.
​
Archaeologists located the tomb of Herod in 2007 in Herodium. There was no body in the broken sarcophagus.