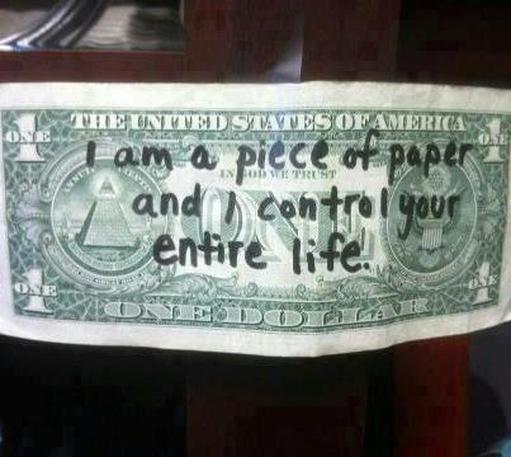 Economic forecasters are telling us what we already know in our hearts . . . the world is plunging into an economic slide unlike anything humanity has ever experienced in history.

Such a crash does not have to happen. There still exists amazing wealth in the world. This fabricated collapse is being purposely brought on by the powerful forces in the shadow government that control and manipulate the world’s monetary wealth. And it appears to be happening in a last-ditch effort to stop the thrust from among the people to evolve through a transition that could trigger a fantastic paradigm shift into an equality that all humans need before they can carry out their mission.

The good news is that the wealth of the world is much more than the artificial appearance of riches that manufactured paper money has put before our eyes. The only reason a dollar has any value whatsoever is because people are programmed to believe it has worth. In reality it is only a piece of paper with fancy pictures printed on it. Since the 1913 creation of the Federal Reserve, a conglomeration of powerful bankers that control and print the paper money circulating in and around the United States, the true value of the dollar has been destroyed. We have endured artificial depression, inflation and other fear-based events, all carefully orchestrated by the money brokers.
​
The purpose of all of this trouble appears to have been to use fear to force people into a state of subservience.

Since the beginning of recorded human history, after people began gathering for community living and farming for food, there was a need to invent a way of exchange for goods bought and sold. Primitive people used rare shells or stones, or they bartered with labor in exchange for grain. This has evolved into the capitalistic system of working for dollars that can be used to buy food, clothing and all of the other things needed or desired by the family.

It has grown into a complex system over the years. Townships, cities, counties, states and the central governments all began taxing the people in exchange for government services. As people grew more and more dependent on these services they were assessed higher and higher amounts of their personal earnings to cover the cost. At first the services included police, fire and public utilities, and the maintenance of roads and a military. But over the years they were expanded to include money for consolidated school districts, colleges and universities. Then came Social Security, Medicare and Medicaid programs for the poor and elderly, and assistance for meeting the growing cost of medical care. More recently they have included public transportation systems, disaster assistance, and manufactured services like the border patrol, the war on drugs, war on terror and just plain unprovoked war.

The Bush false wars in Afghanistan and Iraq, and the corruption linked to these conflicts have helped plunge the nation into a multi-trillion dollar deficit. Suddenly there is no money left in the treasury to pay for services. The frantic slashing of federal assistance to states, counties and cities, coupled with a sudden collapse in the value of real estate has thrown local governments in bankruptcy. Property tax revenues are drying up. Cities can no longer pay for police and fire protection and the maintenance of streets and public utilities. States are pulling back on food stamps, medical and health programs for the poor, highway maintenance and police services. Everything appears to be collapsing around us. What shall we do?

The answer may be found in the heart of Detroit, Michigan, long known as one of the most depressed and undesirable places to live in America. Property values dropped so low in Detroit that good houses could be bought for almost nothing. Many of the old abandoned buildings that made the area so undesirable either burned or were demolished. This has attracted young people back to Detroit. They have acquired the abandoned houses, refurbished them, and turned those vast vacant lots into community gardens. Downtown Detroit is coming alive again.

More and more communities in the United States have begun printing script, or a form of money that local employers use as payment for work done and merchants accept in the form of payment for goods and services. They no longer depend solely on the Federal Reserve’s bogus paper money to conduct business.

If we search the Internet, we can find articles and even books that have been written by people who have successfully lived for months without money. They scavenged trash, public landfills, exchanged work for services and learned to live in make-shift shelters, without electricity, running water and indoor toilets, much like our ancestors did less than a century ago. To make this way of life work, it helped if there was a combined effort of a neighborhood of people, all doing the same thing. These people grow their own food, and go back to home methods of canning and putting potatoes, apples and other produce in root cellars to provide for the winter months.
​
Indeed, it is a harder way to live than we have been accustomed to, but survival is certainly possible after the current system collapses. Going back to that life style, however, will take some preparation. Best to start now while there is still time to work out a plan that fits your environment and meets your personal needs.