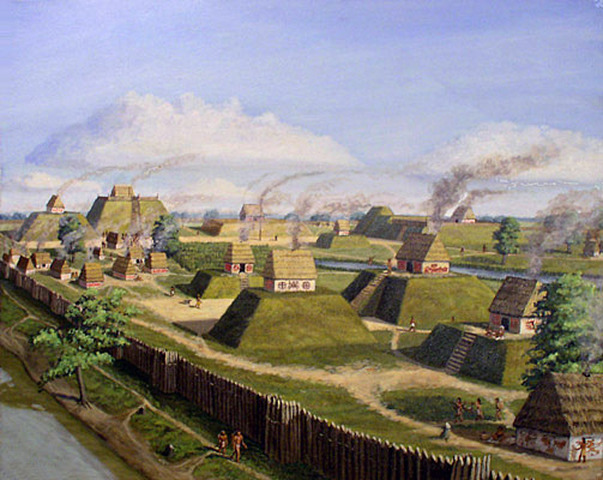 It has been well established that Columbus was not the first European to set foot on North America. Evidence in the rocks have made it clear that Leif Ericsson and his crew of Vikings sailed to Newfoundland and perhaps portions of New England an estimated 500 years earlier.

We have written about other markings in the rocks in Michigan, rocks with perfectly cut holes like the kind used as anchors by Mongolian and Chinese sailors for thousands of years found off the coast of California, and a strange similarity of customs and language of both Native American tribes and Mongolian people. All of this strongly suggests that the Mongols, perhaps under the reign of Genghis Khan or his grandson, Kublai Khan, also were among the early settlers in North America.

In Michigan’s Upper Peninsula, near the site of the Keweenaw copper deposits, have been found rock formations with carved markings identified as Oghamic. People who study ancient text believe they were made by Celtic travelers from Europe who perhaps came to bring copper back to Europe as early as five to eight centuries B.C. English explorers that arrived in the area in the Fifteenth Century reportedly came upon a tribe of blond-haired, blue-eyed Mandan Indians that spoke a form of ancient Gaelic. Yet another stone with Celtic markings turned up in Colorado in 1980.

Of course both the North and South American continents were already inhabited when Columbus arrived. The people were not all tribes of half-naked “Indians” who lived in crude dwellings in the forests. Large cities filled with well-developed cultures existed, or their ruins were found throughout much of Latin and South America, and one large city known as Cahokia existed along the Mississippi River near the place where St. Louis, Missouri now stands. It was once a thriving city of about 30,000 people.

Amateur archaeologists began excavating ancient fire pits in Ohio that author William Connor believes are the remains of prehistoric iron furnaces dating back 2,000 years. His book argues that whoever lived in central North America at about the time of Christ knew and understood the technology of smelting iron to make steel.

That massive stone pyramids were constructed at some ancient time in South America, Egypt, the Middle East, India and China strongly suggests that people who lived in that ancient of times not only knew each other, but shared in a common wisdom and desire to erect such monuments. Structures that appear to be the remains of similar pyramids have been found in Florida and deep in the oceans of the world, which may date the construction of these megaliths to a very ancient time, before the seas covered some of them.

Evidence of ancient global commerce has been found all over the world. Copper jewelry and other items, made from copper mined in Michigan’s Keweenaw Peninsula, have turned in archaeological digs in Europe and South America.
​
Roman and Sicilian coins have been found in Venezuela, Maine, Texas, Alabama, Oklahoma, and Illinois, some of them dating to at least 100 years B.C. Roman pottery was unearthed in Mexico that was dated to about the second century A.D. A carved head was discovered by an archaeologist at Calixtlahuaca, Mexico in 1933 that has been identified as originating from the Hellenistic-Roman school of art and dated about 200 A.D. Also in 1886, the remains of a Roman styled shipwreck was found in Galveston Bay, Texas.

Then there has been the strange Egyptian connection. Two statuettes, a male and female, both distinctly ancient Egyptian in dress and cartouches and believed to depict Osiris and Isis, were uncovered in ancient Mayan ruins at Acajutia, Mexico, in 1914. Ancient Egyptian hieroglyphs were found on a rock cliff north of Sydney, Australia. The carvings tell a story of explorers who were shipwrecked in a strange land and the death of their leader. Scholars have dated the event somewhere between 1779 and 2748 BC.

In 1982 archaeologists found the fossilized remains of kangaroos and other animals native to Australia at Fayum in Egypt. Thus there is evidence that ships not only sailed from Egypt to Australia, but returned again.

There also have been found strange inscriptions, carved in rocks, in various places in the Americas that strongly support the theory that many visitors from Europe came here, and the people living here may have gone there.

For example, a botanist noticed and identified plants in a fresco painting uncovered in the ruins of Pompeii, Italy, that included a pineapple and a species of squash that were both native to the Americas.

A carved inscription on a vertical wall of rock, 3,000 feet up, near Rio de Janerio, reads: “Tyre, Phoenicia, Badezir, Firstborn of Jethbaal . . . “ It is dated in the Ninth Century BC.
A carved story in Phoenician text, found near Parahyba, Brazil, has been translated to read: “We are sons of Canaan, from Sidon, the city of the king. Commerce has cast us on this distant shore, a land of mountains. We set a youth for the exalted gods and goddesses in the nineteenth year of Hiram, our mighty king. We embarked from Ezion-Geber, into the Red Sea and voyaged with ten ships. We were at sea together for two years around the land belonging to Ham but were separated by a storm, and we were no longer with our companions. So we have come here, twelve men and three women, on a . . . shore which I, the Admiral, control. But auspiciously may the gods and goddesses favor us.”

A stone found at Kensington, Minnesota in 1898, contains an inscription describing an expedition by Norsemen into North America in the 1300's.

Even the Japanese appear to have been building ships and exploring the world. It is said that steel blades believed made in Japan have been found in Alaska and distinctive pottery from Japan has turned up in Ecuador.

Then there is the famous Piri Reis world map, said to have been created by Sixteenth Century Ottoman Turkish Admiral Piri Reis. It shows an amazingly accurate description of not only Europe and North Africa, but the coasts of North and South America, various Atlantic islands and strangely, the coast of Antarctica as it really looks under the ice.

Such detail has only recently been discovered with the help of modern technology that allows NASA to peer through the ice and get accurate images of the Earth from space. Some say Piri Reis copied this map from very ancient maps that existed in his day.