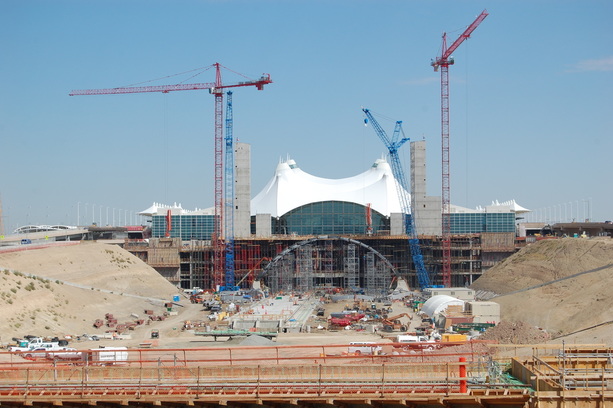 It is almost impossible to separate Jack Sprat’s issues 31 through 33 because they all are connected to the same thing, the strange story of a secret subterranean military facility constructed under the newly completed international airport at Denver, Colorado.

Mr. Sprat lists as issue 31 that the Central Intelligence Agency has moved its headquarters to Denver. Item 32 addresses the giant underground facility allegedly constructed under the airport. And issue 33 includes a massive underground water treatment and purification center also built to serve whatever exists under that airport.

Former Minnesota Governor Jesse Ventura joined the growing number of conspiracy theorists to promote the idea that something out of the ordinary was constructed under Denver’s airport when he hosted a series of television specials called Conspiracy Theory in 2010 and 2011. While Ventura didn’t prove the facility existed, he produced images of entrances to tunnels, military guards at the gate, and talked to people who swore such tunnels and rooms existed.

Ventura went so far as to suggest that a major military base may exist below the airport. The airport was constructed in 1995 on 53 square miles of barren territory far outside the City of Denver. During construction, observers noted that ultra-deep excavations appeared to be going on.

Controversial geologist and conspiracy theorist Paul Schneider, who died under mysterious circumstances in 1996, claimed that nearly 130 deep underground facilities existed under United States soil, nearly all manufactured by the government. He said he personally worked on 13 of them. Schneider was a major contributor to a web site titled Underground Bases and Tunnels. The site offers images of giant boring machines designed to slice underground tunnels through solid rock.

Schneider wrote that the tunneling was part of a $1.25 trillion yearly "black budget" operation by the military. He said work on 129 underground bases has been going on since the days of World War II and possibly even earlier. "These bases are basically large cities underground, connected by high-speed magneto-leviton trains that have speeds up to Mach 2.

William Hamilton III, in an Internet report titled Dulce and Other Underground Bases and Tunnels, writes about a story that appeared in the August 7, 1989 edition of U. S. News and World Report about a secret plan to carry on government in the event of disaster. Called Continuity of Government, or COG, it involved creation of the Defense Mobilization Planning Systems Agency and construction of an underground network of bases connected by tunnels.

Blogger Kevin Hayden recently noted that a story in the Washington Post told of plans by the CIA to relocate its headquarters of its domestic division from Langley, Virginia, to Denver, Colorado. Hayden, in a direct reference to the conspiracy stories about the not-so-secret military facility under Denver’s airport, wrote that "the entire hub of domestic CIA work is headed toward Denver, and more than likely, will be stationed underneath the expansive Denver International Airport."

Hayden added that "I’m pretty sure there are intercontinental military tunnels connecting the two locations, as well as the Denver International Airport to many other places.
We found no stories addressing the water and sewer treatment facilities that would serve a massive underground military complex. We must assume that if such a facility truly exists, the water and sewer systems were part of the design.
​
One report in a site named The Red Zone, said this about the Denver Airport construction project: "They moved 110 million cubic yards of earth. This is about one-third of the amount of earth they moved when they dug out the Panama Canal. The airport has a fiber optic communications core made of 5,300 miles of cable. That’s longer than the Nile River. That’s from New York City to Buenos Aires, Argentina."