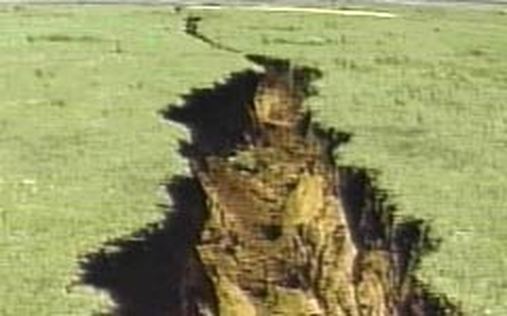 Mystery Cracks In The Earth

Something strange happened in Michigan recently. A large crack stretching several hundred feet in length and about five feet deep appeared in the ground. That the event occurred in a rural area and far from major news outlets probably accounts for the fact that it gained little public attention.

The Michigan crack occurred Monday, October 4, 2012 on property occupied by Eileen Heider on Bay de Noc Road in Menominee County, near the Wisconsin State line not far from the Western shore of Lake Michigan.

Heider said she was sitting in a recliner watching television at about 8:30 a.m. when the recliner shook. “I thought a spring in the chair went,” she said.

Neighbors reported hearing a boom, like a clap of thunder. There was no seismic activity in the area so an earthquake was ruled out.

The next day a friend stopped at the house and noticed something had changed. There was a 15-foot-high mound where the earth had been flat. The mound was separated by a 600-foot-long crack, five-feet deep and twisting through a wood lot. The trees along the crack that once stood vertical, were tipped about 30 degrees left and right away from the crack.

Authorities have not explained the crack. They say there was no record of an earthquake. There is no gas line running through the area so an underground explosion was ruled out. So what caused this strange upheaval?

Back in June, 2005, in another isolated area hear Claude, Texas, another crack in the earth, even more dramatic than what happened in Michigan, also appeared in much the same way. There were no reports of an earthquake. The crack just appeared overnight.

The Texas crack was so massive it stretched hundreds of yards in length and one report said it measured from 30 to 50 feet deep. A nearby pond was completely drained of its water. Geologists tried to explain it by suggesting that the crack was caused by a shifting joint in the plates under the Earth’s surface. But that suggests an earthquake fault, and no quakes were recorded.

Some noted that the Claude crack, located in the Texas Panhandle near Amarillo, is not far from the Palo Duro Canyon State Park. That canyon is 120 miles long, about 20 miles wide and has a depth of more than 800 feet. It is believed to have been cut by water erosion from the Prairie Dog Town Fork of the Red River.

While moving water can be marked as the cause of the many strange cuts and canyons covering the dry lands of our planet, the cause of sudden appearances of the cracks in Michigan and Texas has baffled the people who are trained to know and understand the things going on under our feet.

The Abba Father messages we received earlier that year may have offered a clue. He said that “soon the Earth will heave in despair over all the failures of mankind to make things right.” Considering the belief by many that the Earth is a sentient being, these odd cracks may be only the beginning of these odd events.