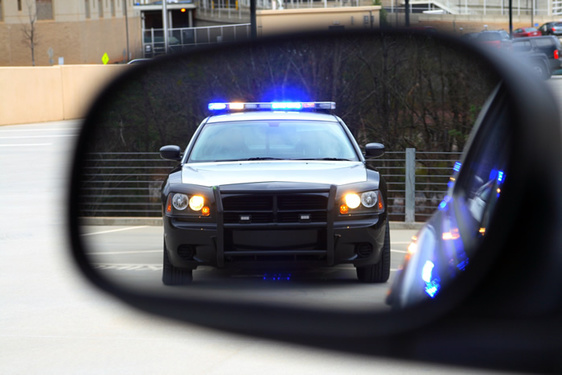 If you have a driver’s license and log many miles on the road the chances are good that you have at least one if not more encounters with the traffic police per year. In all the years that I drove a car I personally found that to be true even though I considered myself an excellent driver and carried a chauffer’s license that somewhat proved it.

But the police had a way of pulling my vehicles to the side of the road at various times, and usually for no other reason than just to be a road bully.

I remember one night driving home from an event I covered during my time as a Michigan bureau reporter that I passed a squad car going the other way. Suddenly I saw something strange in my rear view mirror; it was the flash of that police car’s headlights doing a quick U-turn on the highway behind me. It was obvious that the car drove into a road ditch in making that turn so I stopped, believing there had been some kind of accident. I was about to turn around and go back to assist. But then when the police car suddenly came upon me with about twenty different colored lights flashing and a spot light turned directly on my rear window, I realized that it was all about a decision to pull me over for  some infraction that I was as yet unaware of.

I was held there for at least 30 minutes by two uniformed and gun-packing police officers who claimed they had clocked me on their radar as driving 20 miles over the speed limit. But they were giving me “a break” by only ticketing me for driving ten miles too fast. I thought I was driving close to the nightly Michigan speed limit of 55 miles per hour, but I was mentally busy thinking of how I would write the story of the event I had just covered and I was traveling almost alone on a good paved highway. Thus I admit that I was not paying attention to my speed at the moment the police car passed me.

It all happened in a county some miles from my home so fighting that ticket was going to be problematic. I was given the option to plead guilty by filling out a form on the ticket and mailing that plus a fine of $100 to the county court, or calling the court and setting a date for a hearing before a magistrate.

I knew that I could have fought that ticket and probably had a good chance of winning my case. But it would have cost me a missed day of work and having to drive back to that courthouse, located nearly 100 miles from my home. I also knew that having a hearing before a magistrate was not the same as being tried before a judge. If I chose to fight the ticket, it would involve a second lost day of work and a second 200-mile round trip to that courthouse for a trial that I may or may not win.

Consequently I chose to pay the fine and write the whole matter off as another unexpected “tax” to be paid into the system for the freedom of being allowed to drive my car on Michigan roads.

It was strange how I used to get about one ticket like that every year, usually always when I was driving too far from home to do much about the matter. I knew all of the police in my own county and they knew me. I never was ticketed for anything in my own neighborhood.
I covered police and court news for years and I understood how county government depended on court fines to keep their police departments and jail systems operating. I knew that the simple act of pleading innocent to a traffic ticket, even if I knew I was guilty of speeding, would cost the county more than the money the court would take in from collecting the fine.

I recently read a story by a retired police officer who said he was disgusted by the way police agencies were bleeding drivers for fines via the road patrol ticketing system. As long as drivers quietly sent in their fine money, the court was cashing in. This officer recommended that all ticketed drivers resist by pleading innocent and forcing the court to try their cases.

He noted something that I knew quite well. It costs a county a lot more than a $100 fine to hold a trial over a simple speeding ticket. It means that a judge, a bailiff, court stenographer, the officers involved in issuing the ticket and the county prosecutor would be obligated to take time off from other matters to appear in court and argue the county’s case. Even if you appear in court and offer no evidence in your defense, and end up being forced by the court to pay the fine, you have won.

The point that officer was making was that if everyone who receives a traffic citation would plead innocent and demand a trial, it would quickly bring an end to the senseless ticketing of innocent drivers who may or may not have allowed their feet to press too heavy on the gas pedal at some point in their ride.

I remember one year when Michigan governments were experiencing a severe cash flow problem. The county I covered decided to temporarily lay off all of the road patrol officers. At about the same time, the State Police, who also patrolled those same county roads, were also parked for lack of state funding. We experienced an interesting several months of driving free in that county without keeping one eye on the rear view mirror for patrol cars.

And do you know what happened? Absolutely nothing. We had no serious traffic accidents. The only problem was that the District Court suddenly had no work to do and no fines to collect. When the County Board of Commissioners realized what they had done, and that their actions had caused the money well to dry up even more, they quickly reinstated the road patrol.