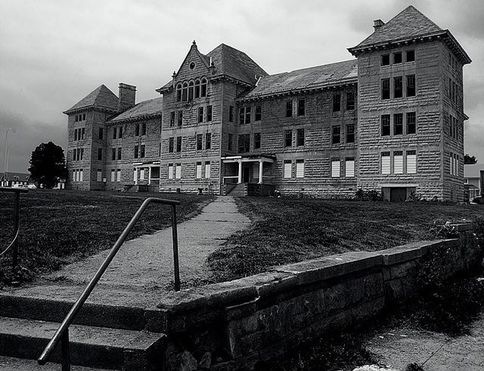 The Haunted Burial Of “Old Book”

There is a story of an unusual haunting incident told in the writings of the late Dr. George A. Zeller, superintendent of the Bartonville State Asylum for the insane near Peoria, Illinois. The foreboding building complex has remained closed and empty since 1972. It is privately owned and considered very haunted.

Zeller, who directed the facility from the day it opened in 1902 until 1913, and again from 1921 until 1935, published a book shortly before his death titled, The Bereft, which tells numerous eerie stories of experiences he had during his two tenures at the hospital. Among the most bizarre stories is Zeller’s personal account of Old Book and the Graveyard Elm.

Shortly after the Bartonville hospital opened, Zeller determined that there was a need for a graveyard on the grounds for the disposal of deceased patients without known family or friends to assume the responsibility. In those days many of the people determined to be mentally insane arrived at the hospital without names or any kind of personal identification.

Among these unidentified patients was a strong, strapping man that had once worked in a Chicago printing house before suffering a breakdown that left him mute and incapable of communicating. He was admitted to Bartonville under the name “A. Bookbinder.” He was given the nickname Old Book.

Except for his inability to speak or communicate, Old Book was found by the hospital staff to be a strong and healthy man, and consequently was given various jobs helping out around the facility. Among his duties was working with the gravediggers in the hospital cemetery.

Even though there was never an assembly of family or friends at the burial of hospital inmates in that macabre cemetery, the hospital staff felt inclined to conduct some kind of ceremony. Before the gravediggers lowered the caskets into the ground, Dr. Zeller would stand at the grave site and say a few words while hospital staff and a few patients stood by in respect.

Old Book became unusually emotional at these ceremonies, however. During the funeral service, he would remove his hat, wipe his eyes and then walk to a large old elm tree nearby, lean against the tree and weep aloud until it was time to lower the coffin. That tree became known as the “Graveyard Elm.”

This behavior continued for several years until the day came when Old Book died and it was his turn to be placed in that hospital cemetery. By then the man was so well known and liked, Zeller wrote that more than 100 uniformed nurses plus the male staff, plus several hundred patients attended a very special service prepared for this unusual man.
This is where the story gets weird.

Zeller wrote that Old Book’s casket was resting on two cross beams above his empty grave during the service. A choir then sang the familiar hymn “Rock of Ages” that was to precede the lowering of the casket. Just as the choir finished the hymn and the men pulled on the ropes to raise the casket for removal of the cross beams, the coffin suddenly flew into the air as if it were weightless. All four men on the ropes had been pulling so hard they were thrown on their backs.

“The coffin, instead of offering resistance, bounded into the air like an eggshell, as if it were empty,” Zeller wrote.  At the same time “a wailing voice was heard and every eye turned toward the Graveyard Elm where it emanated. Every man and woman stood transfixed, for there, just as had always been the case, stood Old Book, weeping and moaning with an earnestness that outrivaled anything he had ever shown before.”

Zeller said the event was so unnerving some of the nurses shrieked and fled the scene, while other staffers were so surprised they came closer to the grave to see what was going on. Watching Old Book wailing at the Graveyard Elm made some of the staff workers think that the body in the coffin was someone else. Consequently, they opened the lid. As soon as the lid came open the wailing stopped and the apparition of Old Book at the tree disappeared. His body was still in the coffin.

This is not the end of the story. Apparently the spirit of Old Book lingered on in yet another peculiar way. Zeller wrote that just after the man’s death, the Graveyard Elm mysteriously began to wither and die. Within the next year the tree was completely dead. When workmen were hired to remove the tree they said an “agonized, despairing cry of pain” was heard at the first swing of an ax. The tree was not cut down.
​
The same noises of sobbing and crying occurred when a second attempt was made to remove the dead tree trunk. A decision was made to allow the remains of the Graveyard Elm to stand. The remains of the tree may still be found in that old graveyard today, not far from the unmarked grave of the mystery man fondly remembered as Old Book.