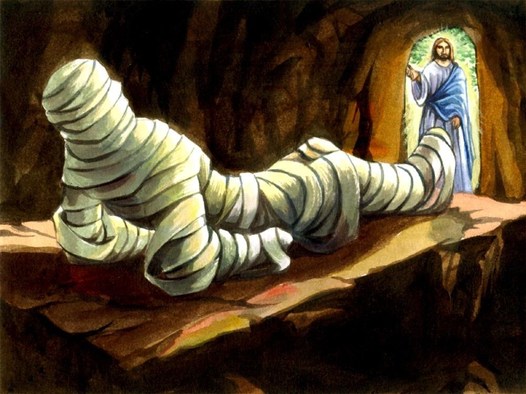 Raising Lazarus From The Dead

According to the Gospel stories, Jesus went around healing the sick and on at least three occasions, raising the dead. Strangely, as amazing as it was to have observed Jesus bringing dead people back to life, the writers of the Gospel stories don’t seem to include all of them in their stories. Only John seems to make a big deal out of it.

Matthew, Mark and Luke all tell how Jesus brought the daughter of Jairus back to life. Luke also notes that Jesus raises the dead son of Nain. None of the first three Gospels mention the Lazarus miracle. John fails to mention the other miracles, but he goes into great detail about Jesus raising Lazarus.

John’s story about the raising of Lazarus is unique because it involves an act by Jesus that violates traditional Hebrew beliefs and appears to be a primary trigger behind the decision by the Jewish religious leaders to kill Jesus.

As the story is told, Lazarus, a brother of the sisters Mary and Martha and a friend and follower of Jesus becomes ill and dies in the town of Bethany, where they lived. The sisters send word to Jesus but by the time he gets to town, Lazarus is long dead and buried.

It is significant that Lazarus had been dead four days before Jesus arrived on the scene. There was then and may still exist an old belief among Jews that the soul hangs around the body for three days before leaving, thinking it may be possible to go back into the body. After three days, when the body begins to decompose, the soul then goes on.

So here comes Jesus on the fourth day, giving comfort to the sisters and weeping over the loss of his old friend. Then, against the objections of the sisters and the Jewish rabbis at the scene, Jesus orders the stone removed from the cave and calls for Lazarus to come forth. Zombie Lazarus slowly emerges from the cave, his body still wrapped in burial cloth.

It was after witnessing this that the Jewish priests begin plotting in earnest to destroy Jesus. Did they perceive him as a sorcerer? How could they deal with such a miracle? Whatever they were thinking, the priests of the day felt threatened by Jesus. After performing an impossible act like raising a man from the dead and then chasing the money changers out of the temple, they agreed that it was time to get rid of this troublemaker once and for all. Their corrupted way of life was seriously threatened and this Jesus guy was gaining a following.

Some theologians believe the Lazarus story may be a fabrication by the writer of John, perhaps to support John’s argument concerning the deity of Christ. Of the four Gospels, only John claims that Jesus called himself God. It is known that John was the last of the Gospels to have been written an estimated 100 years after Jesus allegedly lived. Some scholars believe the book is a collection of writings by several people.

Other than the statement that Lazarus was a brother to Mary and Martha, and a “beloved friend” of Jesus, do we know anything more about this man?

It is said in some ancient text that Lazarus later carried the Christian faith into France, Constantinople and even Syria. Some said he was the first bishop of Marseilles. He was given sainthood in both the Catholic and Orthodox churches. Of course this is all conjecture.

We must imagine how Lazarus must have felt after going through the death experience and then being yanked back into his old body to live again. We have known people who have “died” and then revived, either on the operating table or having drowned. In every case they were not happy about being forced back to their earthly existence.