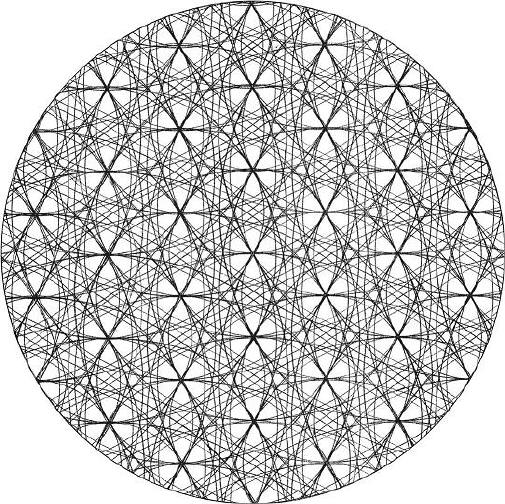 Amazing Design Found In The Flower Of Life Pattern

There is something in the occult world known as Sacred Geometry which is, in essence, a universal system of patterns found in the natural design of everything in the universe. Some say that these patterns are even found in music, light, and the way all things are made.

Of all the beautiful patterns and designs found in Sacred Geometry, perhaps the most perfect and complete is the Flower of Life, a geometrical figure composed of multiple evenly-spaced, overlapping circles that form a flower-like pattern with a six-fold symmetry like a hexagon. Within this pattern, the center of each circle is on the circumference of six surrounding circles of the same diameter.

This design is ancient. It is found in sacred buildings dating back to ancient Egypt. It also has been found in Phoenician, Assyrian, Indian, Asian, Middle Eastern and medieval art.

What is amazing about this design is that all other sacred patterns and symbols depicted in religious art and construction can be found within the Flower of Life. These include the Metatron Cube from which all five of the Platonic solids can be found. The Platonic designs are the tetrahedron, cube, octahedron, dodecahedron and icosahedron.

To find Metatron’s Cube, place a dot or “note” in the center of each circle, then connect each dot with a straight line. A total of 78 lines are created. When you look at the overall picture, you realize that the straight lines form a variety of interesting shapes and designs within a cube. Each of the platonic solids can be found here.

Another important image found within the Flower of Life is the Merkaba, or wheel within a wheel as described in the Old Testament Book of Ezekiel. This is said to be a divine light vehicle used by ascended masters to connect with higher realms.

More contemporary designs show the Merkaba as an interdimensional vehicle made up of two interlocked tetrahedral of light with a common center. One tetrahedron points upward while the other points down. The symmetric form is called a stella octangula, or a Star Tetrahedron, or three dimensional Star of David.

Yet another important and highly significant design found within the Flower of Life is the Tree of Life as depicted by the Kabbalah. This Tree, said to reflect the light of the human soul, includes ten circular centers called sephiroth connected by 22 channels or connecting paths. The central circle is Malkuth, the kingdom of the physical world on which we live. The highest point is Kether, the Crown of the universe representing the highest attainable spiritual understanding that men can achieve.

Within the Tree of Life is found the caduceus, or symbol of coiling serpents representing the Kundalini, a power symbolically coiled within each human and waiting to be unleashed. It is said to be located at the base of the spine.

When you get down to basics in Sacred Geometry, the artist begins by drawing six circles of equal size within a circle, and then places a seventh circle directly in the heart of this circle. This pattern is known as the Egg of Life. Remove the central circle and move all six circles inward so they overlap and touch each other at the center of the design, and the six-pointed Star of David suddenly appears. This pattern is known as the Seed of Life.

Another important pattern found in the Flower of Life is the Fruit of Life, a symbol composed of 13 circles. This design is basically the Egg of Life with six additional circles touching each of the six circles surrounding the central circle. This forms a pattern of six extended circles. The Fruit of Life is said to be the blueprint of the universe. In it can be found the design for every atom, molecular structure, solar system, galaxy and life form in existence.

Even more simplified but equally important occult designs are created by overlapping less numbers of circles. For example, two overlapping circles form the vesica piscis, a common theme in ancient religious art often symbolically portraying the vagina or mandoria. The geometric ratio of the dimensions of the two overlapping circles is the square root of 3, or 1.73205.

Three overlapping circles are known as the Tripod of Life, or Borromean rings. This symbolizes the mind, body and spirit in some esoteric circles. The three rings are interlocking. The design is found in various forms both in art and nature and always portrays unity. It can be offered in varied art forms such as three hands, the three hares as well as three rings that connect.

And finally there is the Tube Torus shape, a one dimensional shape formed by ratcheting the Seed of Life and duplicating the lines within its design. This is considered a basic structure in vortex forms.

There are surprising variations in the Flower of Life design. By adding two additional layers, as shown in the image on this page, it becomes a magical three dimensional image. If you stand or sit about three feet away from this design and let our eyes relax and blankly stare, so the design goes out of focus, the flower will open. Within the flower appears a fierce appearing reptilian entity known as the khaibit man.
​
It is said that if you rotate the flower by 30 degrees and repeat the steps above, a second entity, the Chinese dragon appears.