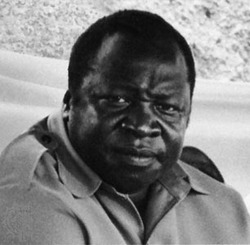 From the time he seized power of Uganda in 1971 until he was overthrown eight years later, Idi Amin is believed to have killed and tortured between 300,000 and 500,000 people. Some say he was among the most brutal dictators that ever lived.

Born in Kokobo, West Nile Province in 1925, Amin had little formal education but began an early military career while Uganda was still under British rule. He moved up in rank and it was said he was notorious as a cruel military interrogator. He stood 6 feet, 4 inches in height, was charismatic and was an expert in boxing, so he was imposing as a military officer.

In 1959, Amin was advanced to the rank of warrant officer, the highest rank allowed for a Black African in the British Army. He returned to Uganda and in 1961 was promoted to lieutenant, thus becoming one of the first Ugandans to become a commissioned officer.

By the time Uganda won its independence in 1962, Amin was closely associated with that country’s prime minister and president, Milton Obote. In 1971, while Obote was out of the country attending a political meeting in Singapore, Amin staged a military coup and seized control of Uganda. He immediately took the role of president and head of the armed forces and in 1976 declared himself president for life.

Amin began his rule by a few popular actions. A radio broadcast accused Obote's government of corruption. Then Amin told the people he was a soldier and that the military government would serve as a caretaker regime until new elections could be held. He also released political prisoners, which the people liked.

But then Amin established “killer squads” assigned to hunt down and kill Obote supporters. That was just the beginning of Amin’s killing spree. He sought out both military personnel and civilians; slaughtering so many people he earned the title “Butcher of Uganda.” Some of the executions were shown on national television stations.

Among the victims were journalists, lawyers, senior bureaucrats, students and homosexuals. Amin expelled all Asians from Uganda. Government agencies including the State Research Bureau (SRB), the Military Police and Public Safety Unit became the centers for torture and executions during Amin's years of power.

The forced evacuation of some 80,000 Asians brought about a severe hit on the Ugandan economy. The Asians were the heart of the nation's businesses at the time.


While his people suffered, Amin lived a lavish but peculiar life style. He had five wives. His behavior was erratic and some believed he was mentally unbalanced. He had quick personality shifts from being charming and happy to turning violent and brutal without warning. As time went on his behavior grew even more erratic.

At one point, after the United Kingdom broke off all diplomatic relations with his government in 1977, Amin declared that he had defeated the British. He then conferred on himself the title "Conqueror of the British Empire."

His full nutty title was "His Excellency, President for Life, Field Marshal Al Hadji Doctor Idi Amin Dada, VC, DSO, MC, Lord of all the Beasts of the Earth and Fishes of the Seas and Conqueror of the British Empire in Africa in General and Uganda in Particular." He also conferred a doctorate of law degree on himself from Makerere University, and a "Victorious Cross," a medal emulating the British Victoria Cross.

Amin, with the help of the Soviet Union, embarked on a large military build-up which raised concerns in neighboring Kenya. Tension grew between the two countries. At one point the Kenyan Government warned that it was ready to counter any attack and deployed troops and armored personnel carriers along the Uganda border. Amin backed down.

Amin’s downfall followed his decision to attack neighboring Tanzania in 1978. The Tanzanian troops fought back and overpowered the Ugandan army, then carried the war into Uganda. As the fighting got close to Kampala, Uganda’s capital in April, 1979, Amin fled to Libya, and later to Saudi Arabia.

He remained in Saudi Arabia until August 16, 2003, when he died of natural causes.