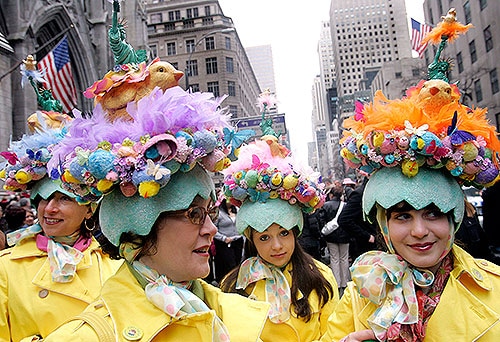 The Annual Rite Of The Eostre Holiday

By James Donahue
​
The celebration this weekend is to the pagan goddess of spring and fertility, Eostre. It was never meant for Jesus.

The Roman Catholic Church scooped up the trappings of the pagan rites of spring the turned it into a celebration of the death, burial and resurrection of Jesus. In essence the holiday marks the end of winter, the rising of Ra, the Sun, and the rebirth of the green and growing foods from the earth.

Labeled as the holiest holiday among Christians and Jews, for different reasons, the celebration has become a complex mixture of bunnies, baby chicks, painted chicken eggs, candies delivered in baskets filled with fake grass, and ladies wearing new spring hats. Some celebrate by going to church at sunrise because this is the time Jesus was allegedly supposed to have risen from the dead.

Many of us wonder why Easter has become such a hodge-podge of traditions ranging from mysterious visits by Easter rabbits that bring gifts and candy to Easter Parades and the display of Lilies.

The crucifixion, burial and resurrection of Jesus is part of the story, but this also is part of ancient pagan mythology dating back to Semiramis, wife of Mesopotamian ruler Nimrod who declared herself mother of the reborn god Marduke. That was the first Jesus story. After Marduke came the Persian sun-god Mithra, the Egyptian solar god Horus, the Far Eastern god Buddha, and the Indian god Krishna. All of these fellows died, some of them by crucifixion, then rose from the dead after three days. They promised to return and take all people who believed in them to heaven. Their life stories parallel the Bible story of Jesus.

It was the Roman emperor Constantine who advanced the cause of Christianity after his conversion from the Mithraic cult. At the time he came to power, Rome ruled the known world, from Britain to North Africa. Constantine made Christianity the official religion throughout Europe. From there it spread to the New World when the Europeans settled North America.

The Americans carried the celebration of Easter to fantastically new and creative levels compared to anything folks in the old world did.

The mixing of rabbits, colored eggs, candy and the other trappings of the holiday appear to have happened when the Christian holiday got mixed in with pagan rites of spring, which, when you get right down to it, is what Easter is really all about.

For example, in the Western culture, Easter falls on the first Sunday following the full moon on or after the spring equinox on March 21. Thus Easter can occur as early as March 22 or as late as April 25. It may never fall on the real date that Jesus died. That he rose from the dead is a myth that is yet to be proven. The Jewish Passover is associated with the mix, since the Bible story maintains the crucifixion occurred during the time of this religious event as well.

The spring celebrations once honored the pagan goddess Eostre, also known as Ishtar and Oestre. She was the goddess of spring and fertility. Thus the decorating of eggs, showing of blooming flowers and newborn animals like baby chickens all are symbols of newness and rebirth. The rabbit, known for its ability to reproduce its numbers quickly, also became a symbol for the fertility of the season.
It is all about sex and the planting of crops for a new season. Notice too, that the very name of the goddess Eostre, Ishtar or Oestre has evolved to the word Easter. The celebration, if you want to participate, is to her, not to Jesus. It has been so for thousands of years.

There is a story about how the Easter Bunny came into being. It seems The Goddess Eostre took pity on a wounded bird that could no longer fly and transformed it into a white hare, then blessed it with the ability to lay eggs in many colors, but only on one day of each year. When the hare later offended Eostre, she banished it to the stars as the constellation Lepus. The hare was only permitted to return to earth on Eostre’s feast day each year and give its special eggs as gifts to the children.

The Easter basket had its origins in Germany, where children traditionally placed their hats in secret places on the night before Easter. If they were good, they were told the "Oschter Haws" would leave colored eggs and treats in their hats. When the German immigrants came to America, the hats and bonnets evolved into baskets.

There is another story that the coloring of eggs is a tradition that dates back to about the Thirteenth Century. It is said that eggs were a forbidden food for Catholics during the Lenten season, so people painted and decorated them to mark the end of the period of penance and fasting. They were eaten on Easter as part of the celebration.

Easter egg hunts and egg rolling are contemporary and very American traditions. The first White House egg roll was started by President Rutherford B. Hayes in 1878. Some people think of egg rolling as symbolic of rolling the stone away from the tomb of Jesus.

Easter candy mostly includes egg-shaped chocolates, rabbit shaped chocolates, and jelly beans, which look like small eggs. Sam Born invented the concept of the marshmallow Peep in the 1950's and that is now included among the traditional Easter candies.

New Yorkers have held a traditional Easter Parade since the mid-1800's. This event was made popular by the 1948 film Easter Parade starring Fred Astaire and Judy Garland, with music by Irving Berlin. Now other cities across America also hold Easter Parades.