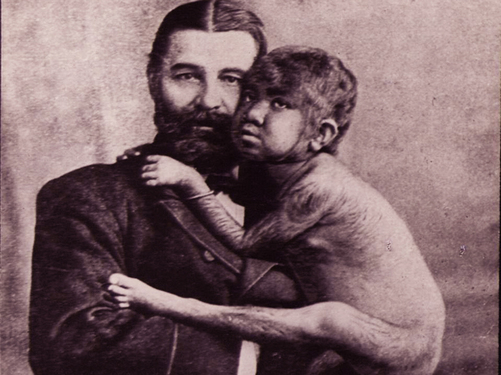 Among the weird and unexplained stories told among the natives throughout our world are the tales of the green children who have popped up in the rural areas of Europe.
As the tales are told, green children stumbled out of the wilderness on two occasions, the first near a place called Woolpit in Suffolk, England, during the reign of King Stephen, sometime around the year 1173. Green children reportedly appeared again in 1887 near the town of Banjos, Spain.

In both cases the children were confused, alone, and taken in by the local citizens. They were unable to speak the language of the locals, were dressed in strange clothing, and there skin had a green hue that astounded the people that found them.

The Woolpit incident is strangely the most detailed. As the story is told local farmers found a boy and girl weeping in a field, were unable to understand their strange language, and brought them to the home of Sir Richard de Calne.

The children had to be taught how to eat. Their first meal was beans after they were shown how to open the stalks. Later they were introduced to bread and other foods. The young boy soon became weak and died, but the girl survived.

She was taught to speak English, given a Christian baptism and eventually her skin color changed to that of the locals. She even married and some say she bore at least one child. She was known as Agnes Barre.

After learning English, Agnes told of how she and her brother came to Woolpit after getting lost in an underground place and stumbled out in a rural area in Suffolk. She said they were from a place called St. Martin’s Land where it was always twilight and everything was green. When they came out of the cavern she said they were “struck senseless” by the extreme light and the unusual temperature of the air.

The 1887 story from Banjos, Spain, was almost identical. As in Suffolk, the children were found by field hands crying and huddled near a cave. They were a boy and girl who were searing strange clothing and speaking a strange language. And they had an odd green tint in their skin.

As in the English story the children had to be taught how to eat, the boy soon died, but the girl lived on. Once learning the Spanish language, she told how she and her brother came from a place that had no sun, but was a land of perpetual twilight.

The girl said she and her brother did not know how they got in the cave. She said they got caught up in a whirlwind and found themselves in the cavern. The girl died in 1892. This story did not explain why she died so young, or if the color of her skin ever changed from green.

Because the stories are so similar, some suggest it is a myth that originated in England, and got retold by natives in Spain.

There is a high probability noted among historians that most popular myths stem from real events that are retold so many times the details become clouded and altered into folklore. British folklore researcher Dr. Katharine Briggs suggested in her book, A Dictionary of Fairies, that the green children story contained themes prevalent in Faerie lore. These would include the color green, the twilight land and subterranean worlds.

Other theories include the possibility that the Earth is hollow and the green children emerged from a hidden world from down under, they were immigrants from northern Scandinavia who strangely found their way to Suffolk, they were personifications of Nature which accounted for the green color of their skin, or that they were aliens accidentally transported to Earth from another planet or dimension.

In a paper by historical researcher Paul Harris, published in Fortean Studies in 1998, the children may have been Flemish and came from the village of Fornham St. Martin, northwest of Woolpit. At that time, Harris notes that there had been a steady influx of Flemish merchants and weavers from Belgium, and after Henry II became king, these people suffered great persecution, many of them having been slaughtered.

Harris theorizes that the children were orphans after their parents were killed, and that they survived by fleeing into Thetford Forest. If they stayed there for any length of time, without finding much food, they might have suffered from malnutrition. One effect of this is chlorosis, which is a gradual greening of the skin.

Harris suggests the children may have wandered into one of the many underground mine passages in that area which ultimately lead to Woolpit. He perceives the scenario of the two children emerging from the cave in a bewildered state, with a starvation-induced greenish pallor, disoriented by the bright sunlight, dressed in unfamiliar Flemish clothes and speaking the Flemish dialect.

And thus would have been born the legend of the green children.