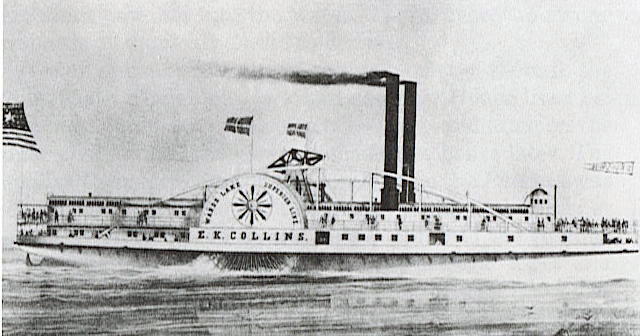 Fire On The E. K. Collins

Canadian furniture store operator William Bartlett didn’t expect to be a hero. Even Bartlett had to admit that he just happened to be at the right place and have a small boat available when it was badly needed.

The estimated 70 passengers and crew members on the burning steamer E. K. Collins needed all the help they could get on the night of Sunday, Oct. 8, 1854. As fire engulfed the wooden ship, lapping up even the lifeboats, the people had no place to go but over the side and into the cold flowing waters of the Detroit River. Twenty-one died but it could have been worse.

The handsome, two-year-old Ward Line steamer was the pride of the fleet in 1854. Built by the well-known Marine City, Michigan Shipbuilder John Bushnell, the Collins measured 259 feet in length and was lavishly furnished to draw passengers on a route that took the ship on a regular route from Sault Ste. Marie to Buffalo.

The boat, under the command of Capt. H. J. Jones of Detroit, was on its way downriver to Buffalo on the night of the fire. It stopped briefly at Detroit to take on freight and passengers, then cast off for a night trip down the Detroit River toward Lake Erie and on to Cleveland.

It was a calm night and there was a nip of autumn in the air. Most of the passengers were gathered in the ship’s lounge. Many had retired to their staterooms after supper.

Jones had been in the wheel house all evening, piloting the Collins through the narrow waters of Lime-kiln Crossing, and he was starting to breath easier because the lights of Malden, Ontario, the old name for Amherstburg, were in sight. Soon the vessel would be entering the open waters of Lake Erie.

But fire broke out somewhere on the boiler deck, just aft of the engine room, at about 8 p.m. Some thought it started from a carelessly tossed ash from a smoker’s pipe. The flames spread with great speed through the oil soaked floors of the wooden ship.

An alarm was sounded but the fire reached the engine room where the pumps were located before the crew got the hoses rolled out. The engineer and firemen had already fled the fire.

Within minutes the steam was too low to turn the big paddle wheels and the ship became a drifting, burning death trap filled with very frightened people.

All was bedlam as the fire raced through the ship’s superstructure. The lifeboats were ablaze so there seemed to be no way of escape. Women screamed. People raced the fire to the bow of the ship while others leaped over the side and into the water.

Bartlett was among the spectators on the streets of Malden who watched in horror as the burning ship drifted past their town. He heard the voices of the people trapped on the wreck and ran to the town dock where his personal boat was moored.

When he caught up with the burning ship, Bartlett found 14 people hanging from the ship’s anchor chain as flames burned just over their heads. He took them all into his boat and rowed around the hull, looking for others.

Five more survivors were found clinging to the port wheel, and six others were on the starboard wheel. Two swimmers were pulled from the water. Before the night was over Bartlett was credited with rescuing 27 of the 44 people that escaped the disaster.

Other survivors were picked up by the propeller Fintry, which drew along side the burning Collins so people could jump to the Fintry’s deck. The Fintry’s master, a Captain Langley, also was declared a hero that night.

The hull of the burned out Collins drifted until it went aground in Callam’s Bay. It was towed back to Detroit and rebuilt as a steam barge. That vessel was enrolled under the name Ark in 1857.

The Ark foundered with all hands during an October gale on Lake Huron in 1866.