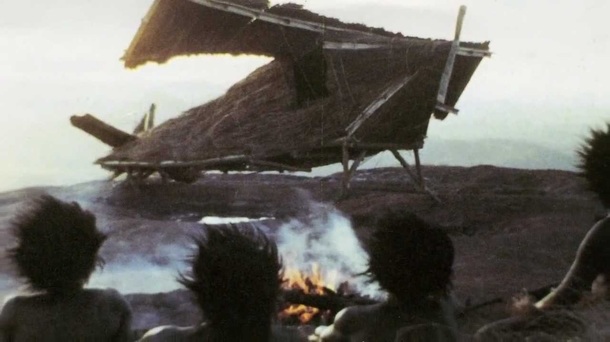 The Gods That Came Out Of The Sky

The mythology of ancient Greece speaks of gods coming to Earth and mating with mortal women. The Genesis story includes a strange tale about the Sons of God who came to Earth, found the women here fair, and fathered children with them.

These stories and other less known myths that suggest alien contact at some distant time in human history sparked a line of thinking that made gods out of the characters that appear to have visited the planet.

Greek mythology tells of gods that were superhuman type characters that dropped from the clouds from time to time to play out the drama within their own lives. Can we assume that the stories may stem from a real-life experience involving contact with aliens that landed in ships from the sky?

The story in Genesis 6 is a strangely accurate record of this event. It reads: “There were giants in the earth in those days; and also after that, when the sons of God came in unto the daughters of men, and they bare children to them, the same became mighty men which were of old, men of renown.”

They were “renown” because they were different, and the parents recognized it early. The babies excelled in intelligence and aptitude. They grew up within a cluster of “renown” children who eventually developed a society of humans. It was at this time that men came out of the caves, began manufacturing tools, building homes and cities, and developing a culture.

This didn’t happen overnight. It probably took several generations of DNA evolution, change and possible manipulation before the final product had an impact in the world. If it was alien manipulation it appears to have gone on for many years. Thus the stories about the “gods from the sky” are deeply imbedded in the mythology of nearly every culture.

The ancient Book of Enoch says there were 200 aliens, identified in this story as angels, who took mortal wives. They also taught the humans about astronomy, sorcery, and numerous other things needed for cultural advancement.

A quote from that book: “Moreover Azazyel (one of the alien leaders) taught men to make swords, knives, shields, breastplates, the fabrication of mirrors, and the workmanship of bracelets and ornaments, the use of paint, the beautifying of the eyebrows, the use of stones of every valuable and select kind, and all sorts of dyes, so that the world became altered.”

To put what happened to the primitive humanoids that existed on the Earth in those days in perspective, consider the story of the “cargo cults” that developed among the natives of some remote Pacific islands after World War II.

It seems that U.S. forces made brief landings on these islands, building temporary air strips and setting up military encampments as they prepared for assaults on Japanese held territories. Sometimes these camps remained only a few weeks, or months, before the military picked up and moved on. They left behind discarded equipment, crashed aircraft and lots of junk.

In the 1960s, missionaries and anthropologists visited these islands and were astounded by what they found.

Tribes had generated religions based on their brief “contact” with the military troops that dropped down out of the sky and came in ships to their territory. They built churches from old aircraft parts. There were altars on which could be found various discarded pieces of military junk that included old radio sets and even cans of military rations.

Thus American military forces were regarded by the primitive people of the islands as “gods” who also came from the sky. They had no other way of explaining what had happened to them.