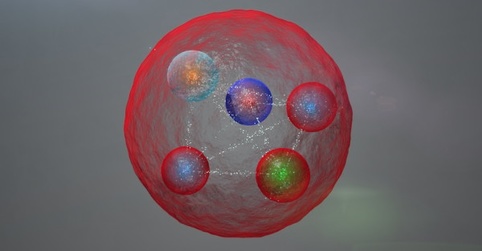 Egad! A Universe Within The Atom!

There was a time when we thought the atom was the smallest thing in existence. Then with high powered microscopes it was learned that every atom is like a mini-solar system with a nucleus in the center and negatively charged electrons swirling around it, and a lot of space in between.

A few years ago scientists began experimenting with "particle physics" and discovered that tiny particles called protons and neutrons exist within the nucleus of every atom.
After learning how to smash certain atoms to create the atomic bomb, the objective next was to go farther and smash protons to create an even more powerful hydrogen bomb. That bomb discharged in the Marshall Islands was the most powerful device to ever be exploded on Earth. It killed a lot of people who were too close to the explosion and sent a toxic nuclear cloud all around the world.

Since then scientists have been busy trying to dig even deeper into the mystery of the things that exist at that enticing molecular level.

After spending billions of dollars and years designing and building the massive 17-mile-long Large Hadron Collider near Geneva, Switzerland, world physicists have been working together to smash atomic particles at nearly the speed of light to (1.) acquire an understanding of how the universe came into existence, and (2.) how atoms, that are mostly space, can collect and form particles that in turn become matter.

In the process the researchers have discovered that atoms also contain elementary particles called quarks that they believed were a fundamental element in matter. They found that composite particles containing quarks become something called hadrons. Thus the name, Hadron Collider. As if that explains what is going on these days in Geneva.

But lo and behold, the particle physicians have discovered something even stranger than a quark! Because it seems to require several of these things to make a quark they have named it a petaquark.

They already classify protons and neutrons as hadrons. But they discovered that one quark and one antiquark create something called a meson. And three quarks make a baryon. Within the mesons are things identified as kaons and pions.

The physicists playing in the strange world of quantum physics at Geneva dreamed up the concept of a Higgs Boson as a way to try to explain why matter has mass. In other words, since all atoms are mostly space, how can a collection of atoms create a rock, or a tree, or a person, and how can all these things co-exist without falling into each other?

Peter Higgs, a physicist at the University of Edinburgh, was one of the people who theorized the existence of the Higgs Boson, thus this boson, if it exists, bears his name.

Higgs and friends reason that something yet unseen makes up a kind of glue that holds particles together, thus turning matter into mass. And whatever that thing is, it exists throughout the universe. They believe that particle carries some kind of magnetic field, known as the Higgs Field. Thus a certain type of particle reacts to the Higgs Field, causing enough to be drawn together until the collection gains mass.

For the past year or more these fellows have been busy smashing amazingly small particles together at the speed of light, and at temperatures colder than space, in a quest to find the Higgs Boson.

So far, it seems that what they have found has been the pentaquark. They describe it as four quarks stuck together with an anti-quark. And whatever that thing is remains another great mystery to be solved.

It seems that there is a secret universe within the atomic world within us that we have only begun to explore.