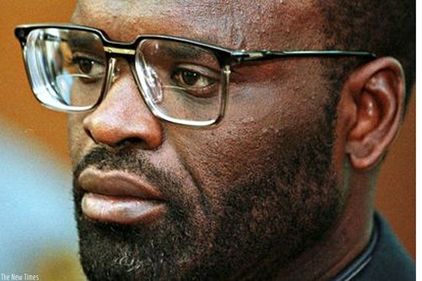 Jean Kambanda and the Rwandan Genocide

It was during the mid-1950’s that we were getting fragmented news reports about a mass slaughter of the Tutsi people in a remote African nation of Rwanda. The stories were terrible but the events in that far-off land did not appear to be causing any response from the U.S. government or any other major world government at the time, so we tended to write it off as an ugly African civil war.

All-in-all an estimated 500,000 to a million Rwandans were slaughtered during a 100-day genocide conducted by the Rwandan military against the Tutsi people. This occurred between April 7 and mid-July in 1994. When it was over, it was said about 70 percent of the Tutsi people and 20 percent of Rwanda’s total population was lying slaughtered. An estimated two million Rwandans were displaced refugees making news headlines.

The civil war had religious roots. The militants, calling themselves the “Army of Jesus” and supported by the Roman Catholic church, claimed it was their mission to destroy the non-Christian Tutsi people whom they considered “God’s enemies. This conflict began in about 1990 when the Hutu-led government pared off against the Tutsi people who were represented by an organization known as the Rwandan Patriotic Front.

To understand the conflict we slide back in history a few years to the Fourteenth Century when the Tutsi warriors moved into the territory and gained dominance over the Hutu tribes through a slow and mostly peaceful infiltration. They were hard workers and soon established a feudal relationship with the Hutu. They possessed livestock and basically ruled over the land.

This changed in 1961 when the monarchy was overthrown. Then in 1994 the military campaign began by the Tutsi to retake Rwanda. But the Hutu-dominated government launched genocidal massacres and succeeded in maintaining control of the nation.

There were peace overtures but when President Juvenal Habyarimana and former Prime Ministre Agathe Uwilingiyimana were assassinated in April, 1994, Jean Kambanda, a high official in the Republican Democratic Movement, was sworn into office as Rwanda’s Prime Minister.

Kambanda remained in power for 100 days during the genocide of nearly a million people. Then on July 19, 1994, he fled the country.
​
Kambanda was arrested in Nairobi in 1997 and brought back to Rwanda to stand trial for genocide. He thus became the only world leader to ever plead guilty to genocide in any court of law. He later rescinded his plea, saying he was confused about the charges against him. The International Criminal Tribunal for Rwanda did not accept the rescission and sentenced Kambanda to life imprisonment. He remains in prison in Mali.