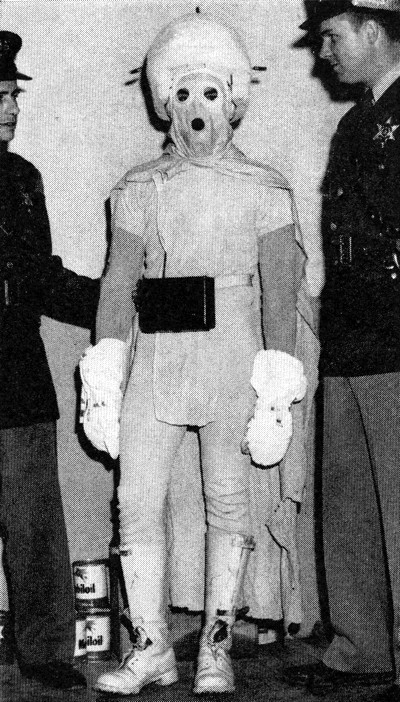 It was in 1958, at about the time I was pouring over books in college that the police in Huron County, Michigan, where I grew up were dealing with the strange sightings of a “Little Blue Man.”

People driving on some of the county’s lonely country roads late in the night were being startled by the figure of a bluish humanoid figure with flashing blue lights. They reported seeing this figure crossing the road ahead of them or walking along the road, sometimes just behind a fence row.

One night in 1958, the blue man appeared before an Elkton school bus filled with high school students returning from a roller skating party.

The story was making headlines, not only in Huron County, but state-wide. Eventually the Associated Press picked up the story. Television stations all over the United States were reporting about the Elkton Blue Man. The story even got in Life Magazine and the military newspaper Stars & Stripes. A video production was even made.

It was quite obvious that rapscallions were at work in the area. It was not long before the guilty tricksters “turned themselves in” and confessed to their mischief.

It turned out that three Elkton men, known local pranksters and just home from a stint in the military and with time on their hands, came up with what they believed would be “the ultimate prank.”

They had been reading about bigfoot sightings, flying saucers and alien abductions. Inspired by these stories, and a pop song “Little Blue Man” by Betty Johnson, Donald Weiss, LeRoy Schultz and Jerry Sprague came upon the plot to create the blue man costume and see what they could do with it.

The idea was to dress like an alien. The costume included some Styrofoam attached to a football helmet, large gloves, some German combat boots, a bed sheet with holes cut out for the eyes and a button sewed on for the mouth, and blinking lights on the helmet. The lights were powered by a battery. Because it was early in April the pranksters also wore long underwear under the costume. The spray painted the entire costume in a phosphorescent blue that glowed in the dark.

It was Sprague who put on the costume and began making public appearances. The trio picked Thursday nights when fewer people were driving on the roads late at night.

Sprague would run along a fence line or along a ditch so drivers could get a good look. They did this for about three weeks before there was a public response.

They thought they might hear people talking about the blue man around town. They were not disappointed. When the stories began being heard, they said “people’s imaginations started taking over.”

Some said the blue man stood 10 feet tall. Others said it was very small, only about two feet. One report said they saw it sitting atop a telephone pole. Soon the local newspapers picked up the story. It was not long before the blue man story went national.

It was after Sprague dashed out in front of the Elkton school bus that the pranksters were found out. They said the next morning the parking lot at the school was filled with police cars. Also more and more of their friends were in on the joke and the word was spreading. They knew it was only a matter of time.

One night when Trooper Bill Collins was sitting in his patrol car in Elkton, the three pranksters approached him. “I hear you are looking for us,” Weiss said. This was when they told their story, not only to the State Police but to Huron County Sheriff Merritt McBride and Prosecuting Attorney James Umphrey.
​
A prank like that would probably have landed those three clever guys in jail if it happened today. But police were friendlier in those times. They thought the whole affair was very funny, Weiss recalled. “We were told to ‘take your underwear and go home,’” he said.