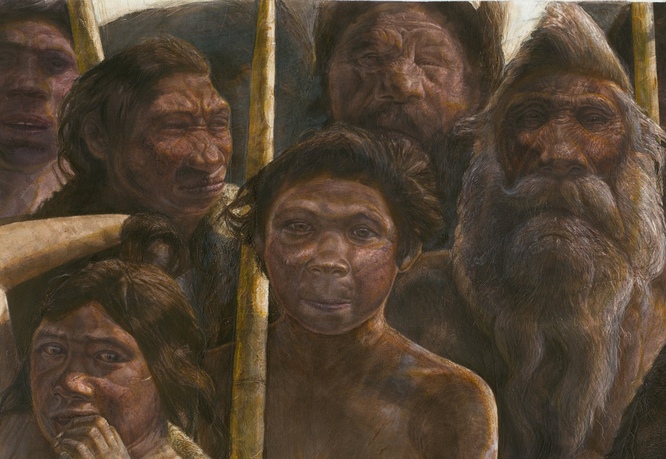 Before Neanderthal There Was Denisovan?

Modern research in human DNA has uncovered some fascinating discoveries in ancient bone and tooth fragments dug up in a Siberian cave. It seems that the DNA of a much older humanoid, dubbed Denisovan, has been identified not only in the bone pieces, but even in the DNA of some contemporary humans, mostly in East Asia and even as far south as Australia.

What is especially interesting about the fossils found in that Siberian cave is that the bones of not only Denisovan, but Neanderthal and even Homo Sapiens, dating back an estimated 640,000 years, have all been found there. And some scientists are daring to imagine that these three types of humanoids not only co-existed, but did some inter-breeding, thus producing some interesting DNA strains turning up in research labs.

The physical features of the Denisovans are almost impossible to imagine because the only proof of their existence is found in a finger and toe bone, and one tooth uncovered in Siberia. Yet the thickness of the bone strongly suggests that the Denisovans were a hearty bunch, possibly similar to our concept of the Neanderthal. That their DNA appears more pronounced in a particular type of human today also suggests that they were dark skinned with black or dark hair and dark eyes.

While archaeologists have found the bones and skulls of a variety of other humanoid types in various parts of the world, the discovery of the Denisovan is a fascinating addition to the mix. This is because once their DNA was identified from the bones of an alleged pure strain in that Siberian cave, evidence of a mixture of that same DNA seems to be turning up in people throughout Asia, Europe and Africa. This suggests that the Denisovan was a relatively successful humanoid that appears to have been in existence long before the Neanderthal came on the scene, and remained here while Neanderthal and even Homo sapiens evolved.

The Neanderthals successfully existed on Earth for about 100,000 years. Did the Denisovans precede the Neanderthals? And if so, were they as successful? Indeed, the DNA from a 400,000-year-old femur bone found in Spain has been confounding researchers. They say the DNA appears to be closer to Denisovan than Neanderthal.

It also has been found that the Denisovan genome contains a component linked to a yet unknown hominin that appears to have existed at an even earlier period. Thus the history of primitive humanoids may date back for perhaps a million years or longer. And no, the DNA of these types still does not link those early folks to the apes.

All of this intensifies the mystery of just where we humans came from. That so-called “missing link” with the apes still remains elusive.

Indeed, a jawbone fragment from a primitive type of “ape-man” that walked upright an estimated 2.8 million years ago, was recently found by a research team working in East Africa. But getting a full picture of such creatures, what they looked like and how they lived remains a teasing part of the puzzle.

And none of this explains why there are so many different races of humans in existence on the planet today; how we evolved so differently and why our cultures are so unique from one another.