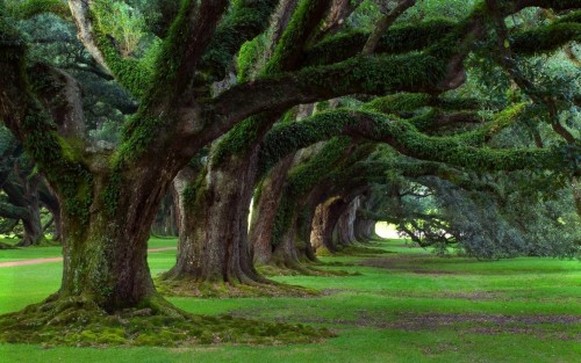 Do Plants Think? Scientists Are Beginning To Believe It

A recent article in the New York Times told of Peter Wohlleben, a German forest ranger and author, whose book "The Hidden Life of Trees" has reawakened scientific research in plant intelligence.

Wohlleben, who has spent much of his life living among and studying the trees he cares for, says he is assured that the trees in his forest "are social beings." He believes they can count, learn and remember, nurse sick neighboring trees, warn each other of danger via electrical signals through a fungal network, and even keep ancient stumps of long-felled companions alive by feeding them through their roots.

Wohlleben's book has been a best seller, with 320,000 copies sold and publishers are planning translations in 19 countries.

His research is not news to me. My late wife, who was an avid florist who kept house plants, always talked about how some plants liked one another more than others. She would arrange her house plants so that they were among "friends." She said the plants also responded well when she spoke to them daily. I believed her.

I had my first realization of how plants respond to human involvement in their environment a few years back, when I was cutting firewood to heat our home. My father and I used to drive back into the wooded area of the family farm every Saturday to fall a few trees, cut them into logs, and load them on the back of a pickup for delivery to the back yard.

Thinking of conservation even in those years, we used to seek out the fallen or diseased trees in the forest, or take older trees that were crowding out the smaller ones. I never dreamed then that what we were doing was exciting the forest.

One day I read about an experiment by some Russian biologists with a few cabbage plants growing in a greenhouse type of environment.

A row of about six cabbage plants were attached to a sensitive instrument that measured various electronic waves transmitted by the living plants. The device worked somewhat like an electroencephalograph attached to the human brain.

During the experiment, a man entered the room each day at a certain time to water and add nourishment to the soil in each of the pots in which the cabbages were growing. The signals were recorded. There was a reaction to this activity each day.

Then one day a new person entered the room carrying an ax. This man walked up to one of the cabbage plants and chopped it to pieces. The response on the recorders was immediate. There was a wild increase in electronic activity. It was clear that the other cabbage plants not only were aware of this terrible event, they expressed a strong response to what just happened.

From that time on, the mere entrance into the room by the man who had wielded the ax, caused the same kind of electronic reaction among the surviving cabbage plants.

The conclusion among the scientists conducting the study is that the cabbage plants not only were aware of their surroundings, they had a memory, they communicated with one another, and responded to events that affected them.

If cabbage plants were that aware of their surroundings and one another, I just knew that the trees in my father's forest were fully aware of what we were doing when we walked among them with chain saws.

After this, I found it difficult to enter the forest and cut down trees. I realized that the trees not only were communicating, but they probably feared my approach. Eventually we sold our home and moved into a smaller house that had a gas fired furnace.

Not long ago the Christian Science Monitor reported on new research by scientists in “the evolving paradigm of plant intelligence.”

A story by Patrik Jonsson noted that some scientists believe plants are capable of carefully considering their environment, speculating on the future, conquering territory and enemies, “and are often capable of forethought – revelations that could affect everyone from gardeners to philosophers.”

Jonsson added that the research has opened “a sprouting debate over the nature of intelligence itself.”

Examples of findings by the research included the discovery that the parasitic plant strangleweed “can sense the presence of friends, foes and food, and make adroit decisions on how to approach them.”

Also the ground-hugging mayapple “plans its growth two years into the future, based on computations of weather patterns.”

Plant geneticists are finding that plants can communicate with each other as well as with insects by coded gas exhalations. “They can perform Euclidean geometry calculations through cellular computations and, like a peeved boss, remember the tiniest transgression for months.”

I have long ago concluded that the Earth is a living sentient being and that everything on the planet is not only alive, but part of a vast universal information system.

It seems that even the grass, the flowers and the trees are sending information not only within their own ranks, but to the Mother Earth and to the Universe. In our great search for the Creator God, it apparently has never occurred to a lot of folks that they have no farther to look than  right under their feet.