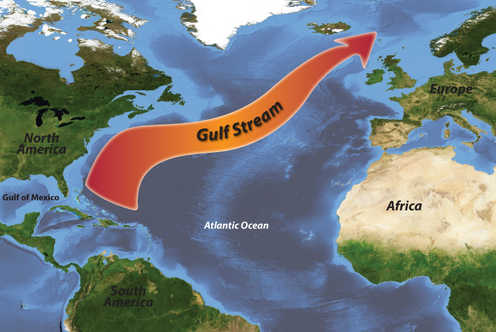 Look Out – The Gulf Stream IS Slowing

In 1999 when the debate over global warming was still heavily mired in the economically-charged politics of the day, Whitley Strieber and Art Bell triggered a heated public debate when they published their book The Coming Global Superstorm.”

That book, and a subsequent movie based on the book, The Day After Tomorrow, alarmed the public because they were based on a hypothesis that Europe was in for some severe winters because fresh water from the melting ice caps were causing the Gulf Stream to slow and possibly stop flowing in the North Atlantic.

While neither Strieber nor Bell are scientists, their book offered a lot of technical data that appeared to support their warnings. Later, with support from scientists who said the fresh water entering the North Atlantic was already having an effect on the Gulf Stream flow, government leaders throughout the United European Union began pressing hard for a world-wide control on carbon emissions in a frantic attempt to head-off what they feared would be ultra-long winters.

Indeed, the stream is believed to keep European countries warmer by as much as four to six degrees centigrade.

All of the hoop-a-la soon cooled when a new study, published in the journal Geophysical Research Letters by a team of United States “scientists,” said satellites used to monitor an array of detectors in the Atlantic showed the Gulf Stream still flowing on its normal northward route and having its usual warming effect on European weather.

Also the UK’s National Oceanography Center found evidence that the Gulf Stream circulation had, indeed, slowed down between 2005 and 2009. The newest studies, however, suggest that this was merely a normal trend and that the stream continues to flow regularly, despite the warming planet and the melting ice.

The reason this was an important study was because the temperature of the flowing water in the Gulf Stream is the driving force that keeps the stream moving. A simple explanation is that cold water in the North Atlantic, including the water from the melting ice, sinks to the bottom of the ocean and flows southward until it is warmed as it reaches the equator. As the warmer water rises to the surface, it joins the northward movement of the Gulf Stream.

The ocean’s “engine” is driven by salt water. But when mixed with ice cold fresh water from the melting glaciers, the engine is losing its drive. That is because the salty water is heavier than fresh water, thus the normal flow of the stream is being altered enough by the mixture of cold fresh water to make a significant difference in the European climate.
It is the warm water in the upper stream that helps keep Europe’s weather moderate during the winter months. A similar warm stream of water affects the climate all along the Western shores of the North American continent.

So everybody was breathing easier once the new research reports disputing the Strieber and Bell warning came out. But now….some 15 years later and as the Atlantic and Greenland ice is melting down at an even more alarming rate, satellite images are showing that the North Atlantic contains a large cold spot, right where the Gulf Stream is supposed to work its magic.

A new report by Professor Stefan Rahmstorf of the Potsdam Institute for Climate Impact Research in Germany is now supporting the Strieber/Bell warning. Researchers are finding that the volumes of freshwater flowing from Greenland’s melting ice cap have slowed down the ocean engine and is cutting the heating potential by an estimated 20 percent.

Rahmstorf and Michael Mann, from Penn State, published a paper in Nature Climate Change in which they reported clear signs that the branch of the Gulf Stream known as the Atlantic Meridional Overturning Circulation is weakening.
​
Rahmstorf said the accelerated melting of the Greenland ice sheet will maintain a record cold North Atlantic between Newfoundland and Ireland as long as the ice sheet continues to melt. And this will have an effect on the weather, especially in Northern Europe.

The researchers are not expecting the changes in the Gulf Stream to impact the Northern Hemisphere as severely as the film “The Day After Tomorrow” depicted. But they said people should watch for more severe winters in the North Atlantic and Europe, and rising sea levels along the U.S. East Coast.

Thus we can expect the ironic effect of colder, longer winters, more severe snows and shorter growing seasons in Europe as the world gets hotter.