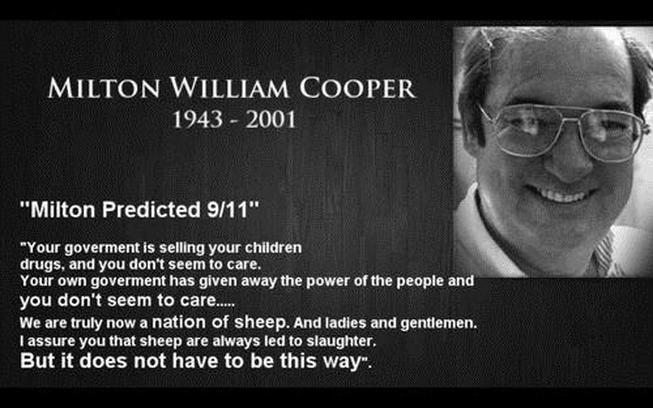 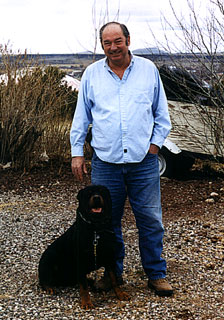 Among the dynamic personalities I had the privilege of interviewing during my time as an Arizona news reporter was the late William Cooper.

Cooper was a real wild-west bad boy from the old gun-slinging town of Eager, Arizona. Eager was well known in the early days as a hang-out for many of the infamous bank robbers and other villains of American history. In more recent years, it was the home of movie star John Wayne.

In his day, William “Bill” Cooper was probably as well known and respected as John Wayne, but mostly among the militia types throughout the United States. He was considered a criminal by the government because he refused to pay his taxes.

When I worked in the Springerville-Eager area in 1997 and 98, Cooper was a hunted man holed up in a house high on a mesa in the heart of Eager. He had proclaimed the federal income tax unconstitutional and was declaring a kind of protest against the government.He also was a member of a local militia and sponsored a radio show, newspaper and Internet web site.  He also was the author of the book “Behold A Pale Horse,” his personal expose of how he perceived corruption in high places within the U. S. government.

Cooper had been fighting the IRS for some time before I arrived. The issue made news after a federal judge in Phoenix ordered him to appear in court and show cause why he failed to pay his income taxes. When Cooper defied the court order, the federal marshals were sent to Eagar to arrest him. They found Cooper holed up in his house with several militant friends surrounding the place. Gun barrels were visible at every window and door. The marshals backed off and there was a standoff.

We all thought that Cooper was dead meat. We just didn't know how long it was going to take for federal authorities to "get" him.

This, of course, sparked a personal interest. I wanted badly to get to meet and possibly interview this rebel who would dare to stand alone against one of the most fearsome police agencies the United States government ever created, the federal revenue service. These boys were known to play rough. They not only tossed people in prison for not paying their taxes, they were known to seize real estate and leave families destitute.

I did the natural thing. I found Bill Cooper's name in the telephone book and dialed the number. Cooper answered. I told him who I was and asked for an interview. He was polite, but refused to meet me, or even let me interview him over the telephone. He said he didn't trust the media. I told him I was from the old school of journalism, and that I did my best to be objective and tell all sides of any story. That was the reason I was calling him, I said. I didn't want to accept the government's story without hearing Cooper's side of the issue too.

Cooper's response was exactly what mine would have been, had I been in his shoes. He told me to read his web site. It turned out that he was an author of at least two books, and he was a prolific writer. He said he had all of his arguments carefully published on his web site, and that I could quote from anything I found there.

I spent hours reading the volumes of material on the Cooper web pages. He introduced his family, posted pictures of his lovely wife and their daughter. He posted a copy of all of the federal documents charging him with crimes, and then proceeded to argue his defense on every issue. He quoted the U.S. Constitution, and explained why he felt the federal income tax was a violation of our constitutional rights. He wrote about his time in military service, when he came in contact with some issues that made him start questioning the direction the United States government was heading.

Cooper was, in many minds, a real patriot. He loved his country, distrusted his government, and was not afraid of saying so. He decried the tragic events at Ruby Ridge and Waco, and urged Americans to defend their right to bear arms at all costs.

Because he did his homework, I found Cooper's web site to be a great source of information about a lot of political and social matters. I didn't agree with many of the issues he raised, especially his condemnation of psychic functioning and remote viewing, but he knew about these things and had an opinion.

As the days past, I found myself visiting the Cooper web pages frequently, because he kept everybody updated about the government's efforts to bring him to justice. He seemed to be taking a very militant stand on this issue, almost to the point of declaring that he would not be taken alive. The people of Eagar and Springerville waited for what we expected to be a big shoot-out on the hill. Cooper claimed that he had a militia contingent of volunteers stationed with him on the hill and that everyone was prepared in case the federal marshals returned.

Except for a few flyovers by some ominous black helicopters, nothing happened during the time I lived and worked at Springerville.

It was about three years later, in the fall of 2001, when the long-awaited shoot-out finally happened. I learned about it after moving back to Michigan and while surfing the Internet. It seems that a number of deputies from nearby Apache County surrounded the Cooper home, used a ruse to coax Cooper out of his house, and attempted an arrest.Cooper pulled a gun and shot one of the deputies in the head before the others gunned him down.
​
The police said they had a warrant charging Cooper with pulling a gun on a neighbor. They said the incident had nothing to do with the federal charges against him. I find that story hard to believe. I think Cooper knew something was coming. According to a story on his web site, he had moved his family out of the country to some unknown place weeks before he died.