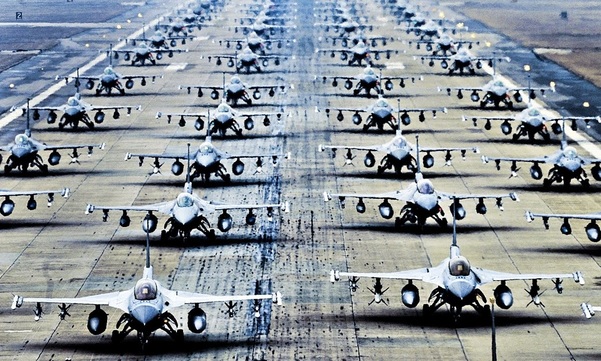 Before he left office, President Dwight D. Eisenhower, a five-star general who served as Supreme Commander of the Allied forces in Europe during World War II, left Americans with a warning that the military industrial complex constructed for the war had a “potential for a disastrous rise of misplaced power.

“We recognize the imperative need for this development. Yet we must not fail to comprehend its grave implications,” Eisenhower warned.

He said this in a speech before the nation in 1961. It is obvious, however, that the powers that followed Eisenhower into high office were not listening or were already bent on a quest for imperialism that has been unprecedented in the history of the world.

Before the war, Eisenhower said the United States “had no armaments industry.” Since the end of World War II the nation found itself involved in a Korean conflict and was “compelled to create a permanent armaments industry of vast proportions. Added to this, three and a half million men and women are directly engaged in the defense establishment. We annually spend on military security more than the net income of all United States corporations.

While we once declared ourselves to be a police force for world peace, the United States has established and maintained a massive global military presence that rivals anything ever dreamed of by Great Britain, Napoleon or the old Roman Empire. We flex our military muscle in every corner of the world. The Bush invasion of Iraq was clearly not an effort to bring peace to that part of the world and the U.S. involvement in Afghanistan, Vietnam and Korea will undoubtedly look more like empire building to future historians.

Chalmers Johnson in a recently published book Nemesis: The Last Days of the American Republic, counted 737 U. S. military bases and more than 2.5 million personnel serving them on every continent. These statistics were calculated in 2005 and obviously do not include new bases established in Iraq and Afghanistan.

To maintain all of this global military presence, and to continue the wars in Iraq and Afghanistan, the Defense Department was expected to spend an estimated $1.01 to $1.35 trillion dollars in 2010. With so-called "budget cuts" pressed by the Tea Bagger Republicans, the proposed 2016 budget appears to be trimming the total military budget down to about a trillion dollars. The nation's military spending is carefully concealed in so many different categories it is almost impossible to put it all together for a single count.
The visible defense budget planned for the year is $607 billion, but this does not include money for veterans benefits, military research, retirements, Homeland Security and a massive interest on outstanding debt.

The Johnson report draws from government documents published in 2005 to show that the property owned by the military for housing the overseas bases is valued as high as $127 billion, with a total value of $658.1 billion for all of the military property both foreign and domestic.

Johnson wrote that “the thirty-eight large and medium-sized American facilities spread around the globe in 2005 – mostly air and naval bases for our bombers and fleets – almost exactly equals Britain’s thirty-six naval bases and army garrisons at its imperial zenith in 1898. The Roman Empire at its height in 117 AD required thirty-seven major bases to police its realm from Britannia to Egypt.”

Even though World War II ended in 1945, we still maintain a military presence in Japan and Germany. We maintain military bases in North America, Latin America, throughout Western Europe, the Middle East, Central Asia, Indonesia, the Philippines, Australia, Greenland and Great Britain.

Jules Defour, in an in-depth report for the website Global Research, states that the U.S. Military has bases in 63 countries and that new bases have been built since 2001 in seven countries.

“These facilities include a total of 845,441 different buildings and equipments. The underlying land service is of the order of 30 million acres,” Defour wrote. He said this makes the Pentagon one of the largest landowners in the world.

He reports that the military bases and installations are “distributed according to a Command structure divided up into five spatial units and four unified Combatant Commands. Each unit is under the command of a general. “The Earth surface is being conceived as a wide battlefield which can be patrolled or steadfastly supervised from the bases.”

In addition to all of the above, the United States is actively involved in the Atlantic Alliance, or (NATO) which maintains a network of 30 more military bases, mostly located in Western Europe.

In addition to the estimated 94,000 troops currently stationed in Afghanistan and 48,000 still in Iraq, the United States has over 40,000 military personnel serving in South Korea, more than 40,000 in Japan, over 75,000 troops in Germany, and nearly 17,000 naval officers at sea, according to the Defour report.

In addition to all of this military presence, the United States had been engaging private defense contractors like Blackwater and Halliburton to act as mercenary fighters and service military personnel in the field.

Defour strongly suggests that the so-called “War on Terrorism” has been created as a replacement for the Cold War as a reason for continued maintenance of such a strong military industrial complex, which includes the operation of major defense plants and bases operating in nearly every state of the union. He describes this as “the greatest fraud in US history” and argues that the war against terrorism is “a fabricated pretext” that constitutes “a global war against all those who oppose US hegemony. A modern form of slavery, instrumented through militarization and the ‘free market’ has unfolded.”

The overall strategy has been to control the world economy and its financial markets and take over world natural resources.
​
Looking at America’s vast military complex from this perspective, it is easy to understand why elected representatives in Washington, all of them heavily financed by secret outside financial interests, are reluctant to consider cutting the nation’s runaway defense budget.

It is the very dilemma Eisenhower warned about. And it has happened right under our noses. Most U.S. families have someone presently employed by or retired from the military.