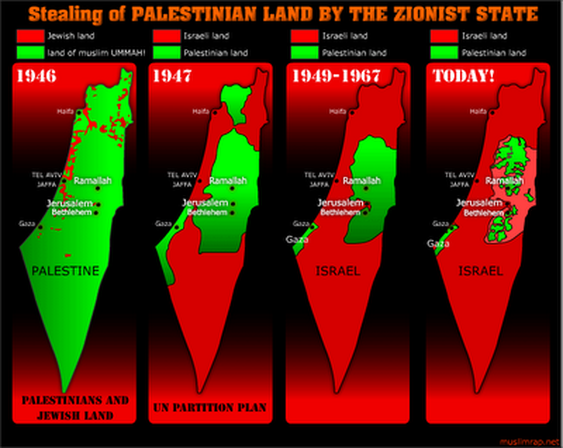 What Power Do The Zionists Have Over The World?

The Jerusalem Post recently quoted a senior Rabbi, Ovadia Yosefs, as saying that all gentiles are put on Earth to be slaves of the Jews. Also the Talmud, a sacred book among Rabbinic Judaists, considered second only to the Torah, states that "Golem (artificial humans) were born to serve us. They have no place in the world, only to serve the people of Israel."

While we find it difficult to believe that all Jews of the world believe the above statements, we suspect that it may be the foundation of the Zionist heart. And this may explain why the very existence of Israel as a nation in the heart of Palestine has been a thorn in the side of nearly all of the nations of the world since it came into existence in the late 1940's.

At first the Jews co-existed among the Palestinians on territory long known as Palestine. But they soon declared war against the Palestinians and all of the Islamic countries surrounding them, declaring Israel to be the "Promised Land" given to them by God as stated in the Torah. They also consider themselves "God’s Chosen People" who stand uniquely superior to all other people of the Earth.

The Christians base their faith on the Bible, which is primarily a book written by Hebrews to tell the story of the origins of the Jewish faith. The Bible includes a New Testament, also written by Jews that tell a story of Jesus Christ and the formation of a Christian sect of followers that rose from among the Jews. This story is a strong part of the Christian faith and consequently a dominant influence on the leadership of the United States, the British Isles, many European nations and Christian sects around the world. All accept the story that the Jews are God’s Chosen People, and a warning that any nation that rises up against Israel will face the wrath of God.

This helps explain why American Presidents have struggled in their attempts to accomplish peace in the Middle East since May 14, 1948 when the Jewish People’s Council declared the establishment of the State of Israel in the heart of Palestine. Israel has since seized control of the water resources in the area and used it for agriculture and to provide for a growing number of people settling there from all over the world.

The Palestinians have been fighting back for a share of their homeland, but until recently they haven't enjoyed much success. It was only recently that the United Nations General Assembly voted to recognize a state of Palestine on the West Bank, east Jerusalem and Gaza Strip, all highly contested lands where the Palestinians have been cramped for territory because of growing Zionist control. This control has been largely aided by the United States, which continues to supply military technology, including atomic weapons, to Israel.

Since the UN resolution, however, Israel has announced plans to build thousands of settler homes in contested areas on the West Bank and will withhold more than $100 million in taxes the Jewish state collects on behalf of the Palestinians. These were malicious acts of reprisal by Israel against the Palestinians for daring to seek their own statehood.

The mini-war between Hamas, the political faction in Gaza and Israel that involved a deluge of rocket bombs fired by Hamas against Israel and a sophisticated return of weapons by Israel against military and government installations in Gaza was reported in the American press as a battle of defense by Israel against the Palestinian attacks. President Barack Obama declared that Israel had a right to defend itself. But when all the facts were known, it appears that Israel launched the first strikes that stirred Hamas to fight back.

In yet another dangerous situation, Israel’s Prime Minister Benjamin Netanyahu has been warning of a pending assault on Iran because of that country’s alleged efforts to develop a nuclear bomb. He has been attempting to get the United States involved in such an attack. Russia and China, which rest on Iran’s Eastern borders, might easily get pulled into what could evolve into a third world war if such an attack occurs. Russia has been assisting Iran in developing nuclear capability and the construction of what Iran claims is a nuclear power plant. The Obama Administration has just negotiated a nuclear agreement with Iran that has eased tensions between the U.S. and Iran. But the U.S. also has obediently sworn allegiance to Israel in the event of an attack.

What is going on? How could the tiny Nation of Israel cause so much trouble in the world?This appears to be because the United States also operates mostly under Zionist control.

Esoteric writer the late Stewart Wilde wrote on his blog: "It could be said that the Jews have enslaved America because they own the American dollar, via the Federal Reserve and they control the bent senators who can order the American army to war." Actually the war power rests on the Congress, but Congress has never sent American soldiers off to battle since 1941 after the Japanese attack on Pearl Harbor. All of the wars fought since were done by presidential order.

But Wilde’s other comment . . . that the Zionists control the American dollar and the U.S. government, appears quite true.

Veteran journalist Helen Thomas, who served for years as a member of the Washington Press Corps, said in an interview with Playboy Magazine that she believes the Jews have total control over the White House, the U.S. Congress and the banking system.

In a second story that appeared in the Jerusalem Post, Thomas was asked if she believed there was a secret Jewish conspiracy. She said: "Not a secret. It’s very open. Everybody is in the pocket of the Israeli Lobbies, which are funded by wealthy supporters, including those from Hollywood. Same thing with the financial markets. There’s total control."
Thomas, who is of Lebanese heritage, was forced to give up her post after a remarkable 60-year career because she said in an interview she thought the Jews should "get the hell out of Palestine."

When asked by Playboy if she was anti-Semitic, she denied it. She said there is a clear distinction between the Jewish people and the Zionists. "I’m anti-Zionist," she said.
Zionism is defined as a Jewish movement working to promote the Jewish people as a sovereign state. But many perceive the Zionists as an organization of Jewish leaders that go out of their way to not only protect this Jewish state, but gain control of major political and financial power.

They might perceive the Zionists almost as an organized crime syndicate, working collectively to take over the United States and perhaps much of the world.

When we look at the number of Jews that hold positions of power over Wall Street and Congress, it is easy to see what Thomas is talking about. They literally run the Federal Reserve, the nation’s banking system, hold positions of elected power in the federal government, and hold key positions in the corporations that control the American media.
​
So when a Jewish Rabbi dares to declare that the gentiles were placed on Earth to serve as slaves to the Jews, we need to take such a statement seriously. They not only seem to believe it, but the Zionists have been secretly working to gain this kind of control for a very long time.