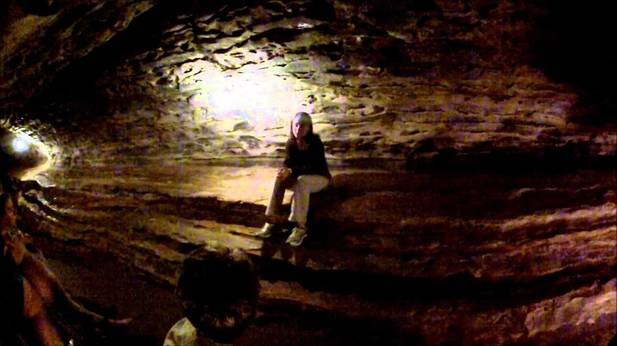 The Ghost of Mark Twain Cave

In his book The Adventures of Tom Sawyer, American author Mark Twain wrote how young Sawyer and his friend, Becky Thatcher, almost died in a cave adventure with "Injun" Joe. What few people know is that the cave Mark Twain wrote about really exists. It is a limestone labyrinth at Hannibal, Missouri, which bears the name Mark Twain Cave.

It was given that name by the locals because Samuel Clemens, who wrote under the name Mark Twain, was among the many people who explored that cave. It is said that another famous cave explorer was Jesse James, who scribbled his name on one of the limestone walls while hiding out with his gang after an 1879 train robbery.

There is an eerie story connected to this cave. It seems that back in the days when young Clemens was among the local explorers of the caverns, the property was owned by Dr. Joseph Nash McDowell, the founder of the Missouri Medical College. One writer noted that McDowell was a brilliant physician who was attempting during his lifetime to petrify a human body. It was said McDowell used the cave as a laboratory for experiments on human corpses.

When his own 14-year-old daughter died of pneumonia, McDowell declined to place her body in the family mausoleum. Instead, he placed his dead daughter’s body in a copper cylinder lined with glass and filled with alcohol. The cylinder was then hung from a ceiling of a room inside the cave.

The cave is cold. The temperature there remains at a chilling 11 degrees Fahrenheit year around, so McDowell reasoned that it was a perfect place to preserve his daughter’s body.

Local children exploring the cave soon discovered the girl’s body hanging in the cylinder. They would gather around it to tell ghost stories. Legend has it that someone pulled the body up by the hair to expose the face for added fright. When parents heard about what was going on they took steps to have the body removed and placed in a proper mausoleum.

That was when the ghost stories began. It was said that visitors to the cave began getting strange glimpses of a young girl, dressed in a long dress, moving through the shadows of the cave. Guides, hired to walk visitors through the cave, have sometimes reported spotting the ghostly figure. Others say they never saw it.

One day in the late 1990’s, however, tour guide Tom Rickey confronted the ghost up close and personally. “I got a cold chill” he said of the incident. “I turned around and she was there.”
​
Rickey said the girl was wearing a long, old-fashioned dress and cape. “I saw her standing there as plain as day. She had long dark hair. Very, very pretty. She was only there for an instant.” He said he thought at first she was a lost tourist and called out to the girl. But then he watched as she walked off right through the wall of the cave not to be seen again.