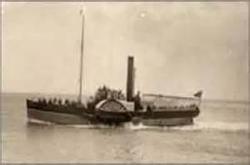 Legend Of The Iron Mountain

There is a story told by folks along the Mississippi River about the riverboat Iron Mountain that steamed north from Vicksburg, Mississippi with a deck cargo of bailed cotton and barrels of molasses and was never seen again.

The Iron Mountain was a steamboat, but not a traditional riverboat. She was a towboat with the job of pulling barges up and down the river. Her destination that day on March 25, 1882 was Pittsburg and her cargo more likely included rice or maybe grain.

As the story is told, another steamship, the Iroquois Chief, came upon the barges later that day, floating freely downriver. The towline had parted and it appeared to have been cut with a knife. There was no sign of the Iron Mountain. It disappeared and was never seen again.

So goes the legend.

The real story of the Iron Mountain is that she struck an obstruction at Stumpy Point, near Island 102, cut a hole in her hull, and sank. The crew scrambled onto one of the barges in tow and everybody escaped, except the chambermaid, who was caught below deck and went down with the boat.

The woman’s body was recovered the next day along with some wreckage a little way downstream. Other parts of the cabin and an ice box were found June 30 several miles from where the boat was lost. The wreck has never been found.

The Iron Mountain was 181 feet long, the largest vessel in the fleet owned by Gray’s Iron Line. She had five boilers and fancy topped smokestacks. Captain W. C. Gray was its first master.

In 1897 the steamer was given new machinery and then sold with four barges to Mound City Ice Co. That company was the owner at the time the vessel was lost.