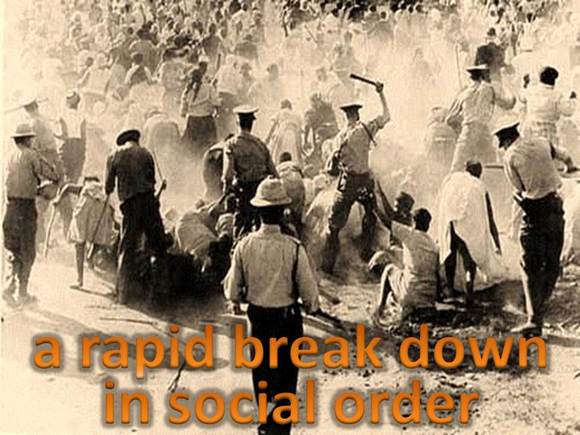 The signs of a breakdown of social order in the United States are so apparent now it is almost impossible for anyone to ignore them. The trouble has been brewing for decades as the nation’s infrastructure has been falling into disrepair faster than cities, counties, states and federal governments have been doling out the badly needed money for their repair. People are out of work, in the streets, rioting, striking and killing. Our presidential election has fallen into chaos.

The so-called leadership in the United States has been incredibly lax; obviously because most of our elected leadership has fallen into the control of big corporate powers. These powers include the oil, coal and gas industries, big pharma, and the military industrial complex. Consequently, instead of recognizing the threats and planning for a better future, our government appears interested only in maintaining the status quo.

Instead of building high speed rail systems, America has been tearing up tracks and allowing its antiquated railroads, public bus system and even its airlines to fall into a form of decay.

Instead of rebuilding our electrical and ever-changing communication systems, rebuilding our crumbling highways and building improved community sewer and water systems, we are watching contractors lay giant pipe for the transport of vast quantities of new crude oil being squeezed from massive sandstone pits in Canada and the Dakotas. We are allowing deep water drilling for new oil and gas reserves off our fragile coasts and "fracking" for gas reserves at the expense of our precious water reservoirs deep under our feet.

Our education system has lost its gleam. Student test scores no longer rate among the highest in the world. College students are plunging deep into debt just to pay the high cost of books, tuition and the cost of living in rented rooms on or near campus.

Our health system is failing to provide for the needs of the people.

Instead of investing our tax dollars into the things that Americans perceive as important, our elected "leaders" have chosen to maintain unnecessary wars in foreign lands, squandering billions of dollars to maintain a costly military industrial machine that is no longer necessary. We have allowed big corporations to outsource American jobs to overseas markets in a quest for cheap non-union labor. We have allowed the Federal Reserve, a private banking cartel, to control the nation’s money supply which has led to an imbalance in wealth. The national debt has plunged to multi-trillions of dollars since the staged attack on 9-11.

We have ignored the warnings that a buildup of carbon dioxide in the air is causing a warming of the planet, which in turn, is bringing on dramatic weather changes that will have a devastating effect on farm crops, the nation’s health and welfare, and perhaps the future of all life on Earth. Now, even as some of those so-called "experts" still argue over the reality of "global warming" on our television screens, the impact of our warming planet is becoming reality. The great storms, heavy rains, severe droughts, extreme heat and harsh winter weather are now upon us. Trees are falling on those old, worn utility lines leaving millions without power for weeks. Fine homes are being destroyed by wild fires, great wind storms and floods.

More and more Americans are losing their jobs, running out of government assistance, defaulting on their home mortgages, and ending up homeless and on the street. Republican politicians are campaigning this year on making extreme cuts in federal spending to "balance" the federal budget. Their agenda calls for slashes in food stamps, unemployment assistance, infrastructure construction and revenue sharing to states and county governments. Key provisions for retired seniors like Social Security and Medicare also are threatened. The only thing that seems to remain assured is continued support for the military and an ongoing low tax rate for the few that control the wealth.

We are hearing stories of cities that are going bankrupt because they are deep in debt, they have lost their credit ratings, and they are unable to pay city workers for public services. This is threatening the jobs of police, fire fighters, the public works workers who pick up the garbage, and maintain the streets, sewer and water systems.

Schools are going broke. They are laying off teachers, doubling up classes, closing down buildings, reducing school curriculum and struggling to operate on less.

Local citizens are in no position to pick up the slack. Schools and local communities operate heavily on property tax revenues. And tax payments are based on the cash value of the real estate. As home values plummet, the amount of tax money collected from home and property owners falls. The homeless and jobless pay no tax whatsoever.

We are witnessing a domino effect. The complex social order that has existed in the United States and abroad for years is crumbling. If we don’t come up with some way to put the brakes on this problem, we could be rushing toward a complete breakdown of the social order that has kept us safe and secure.

Imagine attempting to carry on without police and fire protection, with no running water or electricity in our homes, no food in the stores to buy, and no money to buy food if we could find it. There would be no gasoline with which to operate our cars and trucks. No fuel to heat our homes during the winter months. Nowhere to escape the scorching heat in the summer. We would be living a Mad Max scenario. Without forming protective armed gangs and building fortifications against marauders, we would not be safe. Life would be harsh.
​
Is this all happening because of reckless greed among the few who control the power and the wealth of the world? Or is this part of a master plan? And if the latter, why would they want to make such drastic changes to our world?