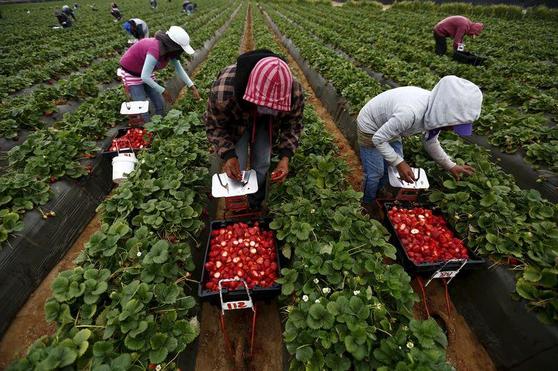 When Mexican Migrants Picked Our Fruit

The Mexican migrant issue was never always a problem. There was a day, not too many years ago, when entire migrant families freely drove across the border into farmlands all over the United States to help harvest fruit and vegetables. After the harvest, they drove back to their homes in Mexico, their pockets jingling with more cash than they could ever have earned in their home towns.

It was a good deal for the migrant families, who came and went in shiny late-model trucks. And it was a good deal for fruit and vegetable farmers because they migrants offered low-cost and efficient labor to both weed the fields and harvest the tons of cucumbers, strawberries, cabbage, blueberries, melons, apples, pears and plums growing in abundance across the landscape.

Late in the 1960's, while I was working at the Kalamazoo Gazette, in Southwestern Michigan the Detroit Free Press published a front page expose on what the newspaper claimed was the ill treatment of Mexican migrant farm workers on fruit and vegetable farms operating in our part of the state. The Free Press had sent a reporter out to observe the migrant families on a few selected farms. He produced an account of how these people were forced to slave in the hot sun for minimum wages, and sleep in shanties with no plumbing, no screens on the doors and windows, and lie on old smelly mattresses.

A side-bar to the story was a report that one of the state legislators was introducing a bill in Lansing that would make it mandatory for farmers hiring migrant labor to provide improved living conditions, including indoor plumbing and lighting, and install windows and screens on the openings.

It was a story generated in the Gazette’s back yard and my editors went a little crazy to think that we had been “scooped” on a story that spectacular. Because I had previously worked at Benton Harbor and was familiar with the area, I was assigned to go into the field and come back with our own version of the same story.

I grew up in a farming area and was familiar with migrant workers. I also had visited some of the fruit and vegetable farms and questioned whether conditions were really as bad as the Free Press said they were.

I returned to some of the farms and found that it was true; the workers were staying at night in shacks without indoor plumbing, electricity or basic conveniences. Some lacked screens on the windows so the workers were being bitten by mosquitoes and pestered by flies. They slept on old smelly mattresses and were lucky to have a chair to sit on when they ate their meals. Other farms offered slightly better accommodations.

When I asked the farmers about this problem, I was told that they had attempted to make improvements to the living quarters at various times, only to have furniture, screens and everything else they put in the buildings stolen or destroyed.

I found that both the farmers and the migrant families were upset about the Free Press story and the fact that it had triggered proposed legislation in Lansing that would force farmers to invest a lot of money in improvements to the living quarters that were used only a few weeks out of every year. The crop farmers warned that if they were forced to spend that kind of money, they would invest it in costly mechanical harvesting equipment that was available.

Some of the farmers were already using machines to pick blueberries, shake cherries, plumbs and other fruit from trees, and one farmer was testing a device that would cut and stack asparagus like farmers once cut grain and put it in shocks. They said they hadn’t gone to this machinery because it was still cost effective to hire migrant labor. The proposed legislation, however, would probably make the difference.

The migrant families said they were happy with the way things were and did not want to lose their summer jobs.

One man, who operated a radio and television repair business in Mexico, said he and his family came to the farms in Michigan each summer because they made good money and it was like a vacation for them. He said they didn’t mind living in rough conditions because it was like camping out and was only temporary.

I spoke with a large migrant family that was traveling around in two late model trucks. This family was picking melons on a large crop farm. They said they liked the way of life they had because they were collectively making more money than they could make in Mexico. The spokesman for the family said they were clearing about $300 a day, which was good money for them.

The melon farmer said that all of the farmers were upset about the Free Press story and asked that I write the real story of what was happening on the crop farms.

I did just that. I reported both sides of the story, as I have done all of my life. True, some of the migrant families were forced to stay in relatively deplorable conditions while working on these farms. But they were only there for a few brief days before moving on, and they were not complaining. These people also expressed fear of losing their summer employment. It was a system that had worked well for both farmers and Mexican migrants for many years.

My story struck a nerve in the bleeding heart sector of Kalamazoo. The newspaper and I personally received a flood of hate mail for having published such a story. My editor backed down and ran a public apology. As long as I remained at that newspaper I was blackballed from ever getting a politically oriented story assignment again. It was punishment for writing what I perceived as a true and balanced report instead of folding to the political whims of the day.

As it turned out, Michigan legislators passed those tough laws forcing farmers to offer improved living conditions for migrant workers. The farmers either invented or purchased existing harvesting machinery, and the familiar sight of seasonal migrant families working on so many Michigan farms was no more.