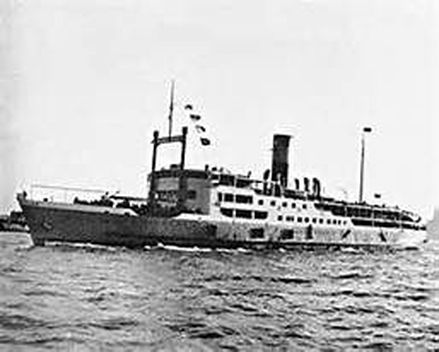 Over 3,000 Chinese Died In Kiangya Disaster

Among the most deadly shipwreck events in recorded history was the loss of the Chinese passenger steamship Kiangya, that was packed with refugees from the Chinese Civil War. This steamer struck a mine and blew up in the mouth of the Huangpu River, south of Shanghai, on Dec. 4, 1948.

The Kiangya had a displacement of just 2,100 tons, with room for 1,186 passengers, but because they were fleeing the advancing Communist army the refugees packed the ship far beyond its legal capacity. There was no count of the number of people that boarded the Kiangya, and consequently the actual death count will never be known. There were 2,250 paying passengers who boarded at Nanking, and it was estimated that the ship carried as many as 1,200 stowaways. It was thus estimated that somewhere around 3,000 humans perished in the disaster.

The steamer left port late in the afternoon and by 6:30 p.m. was edging into the Whangpoo River and moving out into the open sea. The explosion occurred without warning in the stern of the ship and the Kiangya sank quickly in shallow water to the bed of the river. Passengers on the lower decks had no chance.

Some 700 survivors escaped because they were lucky enough to have been on the upper decks and got to the top deck where they stood in water up to their waists. There they waited until help arrived.

Because the explosion wrecked the ship’s radio, there was no chance for an S.O.S. Thus the survivors waited an estimated three hours before the steamship Hwafoo came upon the disaster scene, discovered the people standing on the wreck, and radioed for help.
The injured survivors were brought to Shanghai where they were hospitalized.

It was believed that the Kiangya struck on old mine placed outside the harbor by the Japanese during World War II.

There is a story that another Chinese steamship, evacuating troops from Manchuria, sank at about this same time with 6,000 people, thus becoming an even worse maritime disaster. But the name of this ship and details of the event are so sketchy we have reason to believe the two events are different versions of the Kiangya disaster.
​
By comparison, the Sultana explosion on the Mississippi River in 1865 killed 1,547, the Titanic disaster in 1912 claimed 1,517 lives, the Saudi ferry Al-Salaam Boccaccio burned and sank on the Red Sea in 2006, killing 1,312 people, the Lusitania, sunk by a German U-boat off England in 1915 took 1,198, the General Slocum that burned at New York, killed 1,021, and the Empress of Ireland, sunk in a collision on the St. Lawrence River in 1914, claimed 1,012.