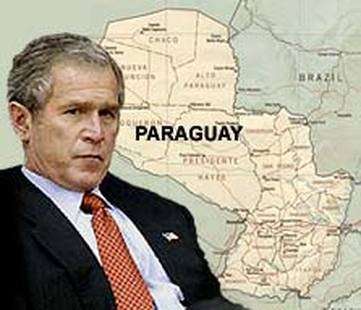 There have been persistent reports that the Bush family has purchased nearly 300,000 acres of land in Paraguay, South America, and is secretly building and equipping a costly underground bunker there. Do these two former U. S. presidents know something about looming future events that we are not being told?

A report in Counterpunch stated that the Bush family actually bought 98,840 acres at Chaco, Paraguay, near the borders of Bolivia and Brazil, and that the purchase caused concern in all three governments.

The story suggested that the land was really a grab for world resources rather than a place to build a hideout from a looming catastrophe. "Argentinean Adolfo Perez Esquivel warned that the real war will be fought not for oil, but for water." The Counterpunch story notes that the Bush land lies over Acuifero Guarantis, one of the largest underground water reserves in South America, lying under Argentina, Brazil, Paraguay and Uruguay.

A biting report by Mickey Walker in a 2010 issue of LPJ Magazine noted that Jenna Bush, the daughter of George W. and Laura Bush, secretly secured the purchase of a large tract of land when she went to Paraguay that year in what was billed as a public relations appearance with and for the United Nations children's agency UNICEF.

The purchase by Jenna Bush during that trip involved a tract of over 100,000 acres. It was said the property complimented another 200,000 acre Paraguay land purchase made by her grandfather, President George H. W. Bush, in 2005.

Walker wrote that the Bush Carlyle Group and James Baker, who served as Secretary of State in the George H. W. Bush Administration, also invested heavily in land in the same region. In addition to the rich water resources, Walker said the land also is believed to be rich in natural gas and certain minerals.

Walker noted that the elder Bush, a former CIA Director, had access to certain intelligence reports that most other people in the world never saw. Thus he said the buy-up of such large quantities of land in that remote part of South America appeared suspicious.
"It seems that the Bush family has walked on the edge for generations. Perhaps having a place of sanctuary like Paraguay for the Bushes is like buying an insurance policy. Paraguay has no extradition policy."

When Walker wrote those words in 2010, a lot of people all over the world were still expecting George W. Bush, Dick Cheney and other members of the Bush Cabinet during his years in office to be charged and brought to trial on war crimes against the people of Iraq. To date this has never happened.
​
The actions by the Bush family was an interesting observation by our Godlike Production writer Jack Sprat. It appears there is some truth to the story. What it all means is yet to be learned.