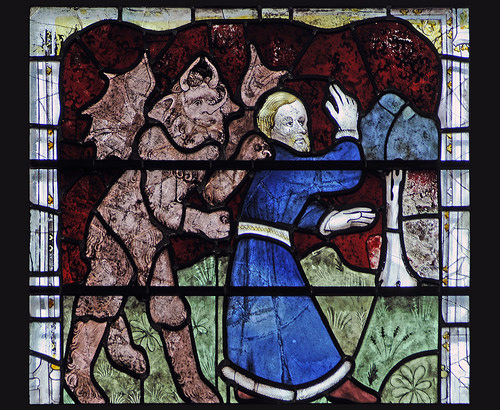 The Agony of Theophilus

There is a strange legend involving an orthodox cleric who allegedly made a pact with the Devil to gain an ecclesiastical position of Bishop in the Sixth Century Church of Adana, Cilicia, which is now Turkey.

There have been many stories about famous and infamous people who have made such pacts but the story of Theophilus is believed to be the oldest. His story may also have been the inspiration for Goethe’s tragic play, Faust, published in 1790.

As his story is told, Theophilus was a church archdeacon and treasurer selected by unanimous vote to be elevated to the position of bishop. But out of personal humility, he turned the job down. The new bishop was later forced to remove Theophilus from his archdeacon post. It seems that Theophilus was accused of stealing money from the church treasury.

Theophilus regretted his decision to turn down the bishop’s job and called upon a wizard to help him contact Satan. Satan agreed to fix the situation but first he insisted that Theophilus sign a contract with his own blood in which he renounced Christ and the Virgin Mary. Theophilus was so distraught that he signed the covenant and the devil saw that he was reinstated to the clergy and elevated to the position of bishop.

Years post and Theophilus grew to regret his pact with the devil. Fearful for his soul, he repented and prayed to Virgin Mary for forgiveness. He continued praying and fasting for 40 days. When Mary appeared to him, she verbally chastised him for his foolishness. When Theophilus begged her forgiveness, Mary finally promised to see what she could do.

After another 30 days of prayer and fasting, Mary appeared to Theophilus again and granted him absolution. But Satan was not in agreement. But three days later Theophilus awoke to find the malicious contract on his chest. He took the document to the real bishop, confessed what he had done, and the bishop burned it. At this, Thephilus died out of the joy of being freed from his terrible burden.

The church later canonized Thephilus but the circumstances of his beautification have been lost in ancient church records. He died in the year 538.

The Theophilus story played an important role in establishing the importance of the intercession of the Virgin Mary into Catholic Church dogma. Her position as the Mother of God grew in importance during the Eleventh Century and reached a level of importance that appears higher than that of Jesus to Catholics.

The story also is an example in the development of the theology of witchcraft. At the time this event allegedly occurred, the summoning of demons was not considered by the church to be a damning sin. Theophilus’ problem was that he sold his soul and then sought help from the Virgin Mary to win it back.
​
That he repented to the point that he defeated Satan earned his title of sainthood.