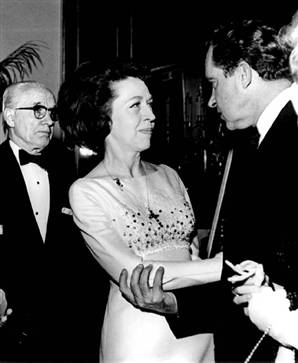 There is a story that President Richard M. Nixon secretly consulted with noted American psychic Jeane Dixon not only during his term as president but during his years in the legislature.

Historian Timothy Naftali reveals the link between Nixon and Dixon in his book “Blind Spot: The Secret History of American Counterterrorism.” He told how Dixon warned Nixon of terrorist plots in the United States and Europe even during that period of American history.

Naftali wrote that Nixon's personal secretary, Rose Mary Woods, acted as the go-between, bringing prophetic  warnings from Dixon to the Oval Office. Nixon jokingly referred to his source as "the soothsayer." Yet he apparently put stock in the Dixon reports, since some of them were accurate.

One warning of terrorist attacks in 1972, just after the attack on Jewish athletes during the Munich Olympics, prompted Nixon to hold a special meeting with Henry Kissinger to discuss the possibility. He instructed Kissinger to create a special counter terrorism committee to plan how the nation would react to such an event.

The Nixon tape recordings of the discussion that occurred that day revealed the following:

Nixon: "Rose talks to this soothsayer, Jeane Dixon, all the time. They are  desperate that (the terrorists) will kidnap somebody. They may shoot somebody. We have got to have a plan. Suppose they do, for example, Henry, suppose they kidnap Rabin? And they ask us to release all blacks who are prisoners around the United States. And we didn't and they shoot him? Think of it! What the Christ do we do? We are not going to give into it. We have got to have contingency plans for hijacking, for kidnaping, for all sorts of things that can happen around here."

Naftali suggests that Nixon's interest in psychic warnings was peculiar, and if it had been revealed to the American people while he was in office, would have made headlines.

This way of thinking is generated from a Christian dominated social structure that denies the possibility of right-brain or psychic functioning. The church regards such things as the work of Satanic forces and tells followers to avoid it at all costs.

Unfortunately this forced presidents like Richard Nixon, John F. Kennedy and Ronald Reagan to conceal the fact that they, like the many kings who preceded them, sought council from wizards standing behind the throne. Since Reagan, no American president has allowed psychics to come near them.

Successful world leaders have always taken council from the finest psychics available to them. Even Stalin and Hitler relied on their psychics before they made a move.

That image of Merlin the Magician, giving council from behind the throne of King Arthur, was quite realistic. While Arthur and his fabled Knights of the Round Table may be a myth based upon a local legend, the real kings of the earth indeed depended on advice from psychics. And like the Wizard of Oz, due to Christian sentiment, the magician worked from behind a curtain.

That American President George W. Bush, a declared fundamental Christian, refused to accept psychic functioning and listen to the advice that could readily be available to him, has been a predominant factor in the failures now seen in the national policies after Mr. Bush took office.

There is no evidence that Mr. Obama has sought psychic counsel although with his background, we think there is a strong possibility that he may have done so secretly.

Bill Clinton reportedly listened to psychic counsel. If Hillary wins the office, there is a strong possibility that she will as well.