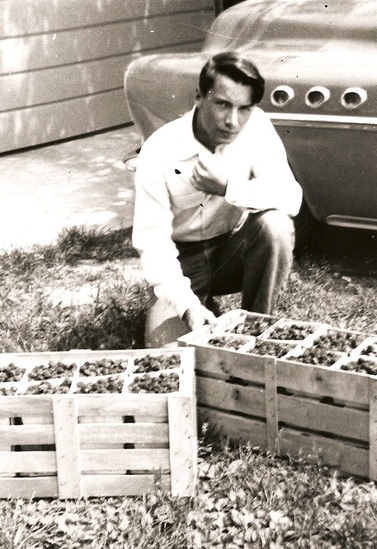 Strawberries By The Case
Glad To Have Lived When I Did

If there is any possibility that I had any choice in the time I was to live, and the family I was to be born into, I couldn’t have chosen better.

Times were good in the years just after World War II. As a young lad I started making my first money caddying at the local golf course, where the club house was located just down the hill and through the trees from the front door of our house. I discovered that if I stood around with the other young boys that gathered at the parking lot, golfers would pick us to carry their clubs. We usually earned a quarter for every round on that nine-hole course.

A quarter doesn't sound like much in these days of high inflation, but it was good money then, especially for a 12-year-old. I earned enough in one summer to buy my first bicycle.

Later, when we moved on a farm north of town, I planted an acre of strawberries, then hired kids from town to help pick the berries when they came in season. I sold the berries by the crate through newspaper ads and drove them to people's front door. We could get special "farm permits" to drive at age 14 in those days. A local grocery store bought what didn't sell each afternoon. I earned $300 that first year, enough to buy a three-year-old Chevrolet; my first car.

While in high school I nabbed a part-time job at the local weekly newspaper. I learned how to write copy, operate a linotype machine, set hot lead face plates for flat-bed printing, operate a speed graphic camera and develop film.

During my college years I worked summers at various jobs. The first year I worked as a night watchman for a local factory. The next year I worked for a contractor laying floor tile in homes and public buildings. The next summer I was back on the newspaper beat, this time at a small daily paper where I covered police news, wrote feature stories, learned hot lead editing, sold advertising and drove rural delivery routes.

Jobs were easy to find then. There was no such thing as a "probation" period before you found out if you had a permanent job. And we never heard of one-year "evaluations" by corporate subordinates. If we did something wrong we got a royal chewing out which was, in a strange way, the way we learned how to do things right.

While living on campus, I held part-time jobs. I washed dishes for a university food commons, bused food then washed dishes at special banquets, and after taking a college photo class and gaining access to the journalism department's darkroom, began making money doing photo work.

I was in a serious automobile crash in my senior year and because of a head injury that temporarily affected my ability to comprehend what I was reading, was forced to take a year off from my education. I took a job that year cleaning oil wells in Southern Michigan. The head injury also saved me from the draft and a possible deadly fate in the jungles of Vietnam.

Each job was an education. I met interesting people, had unique experiences, learned a lot about the types of professions available in the field, and became a more well-rounded individual. I do not regret any of those memories.

My years as a newspaper reporter fell at a time when newspapers were having their best years. Everybody read a daily paper and usually also a hometown weekly. I worked for some great editors who taught a code of honesty and balance in what I wrote. We went beyond the basic rules of answering "who, what, where, when and sometimes how," and always sought the other side of every controversy. We went out of our way to never editorialize, except when allowed to write an opinion piece for the editorial page.

While working as a bureau reporter at South Haven, Michigan, I became a volunteer fire fighter and established myself as the department's photographer. I took pictures at fires, sent my best shots to my newspaper, and sold pictures to insurance companies.

Believe it or not, I also found time to go into business as a house painter. I discovered that I really enjoyed working with my hands and making shabby looking buildings look fresh and new again.

Those were the good years. But things were about to turn bad as time passed.

The newspapers were in tough competition with new television news channels like CNN just before I retired from the Gannet chain. My paper was frantically changing its format from honest and balanced news to features and what I called general "fluff." I was ordered to quit covering city council and county board meetings and spend my time attending high school football games and daily social events. Once I was assigned to ride a mass transit bus and ask riders about their experience. I began to hate my job because I knew we were on a bad path.

Newspapers are now considered dinosaurs because the print media cannot keep up with television and Internet news reports. I am still writing for this personal blog page, and occasionally get stories published on other Internet publications, but never get paid for my work. It is all done for the love of writing the story.

How fortunate I was to have lived during the good years when I was actually paid to do something I loved to do.