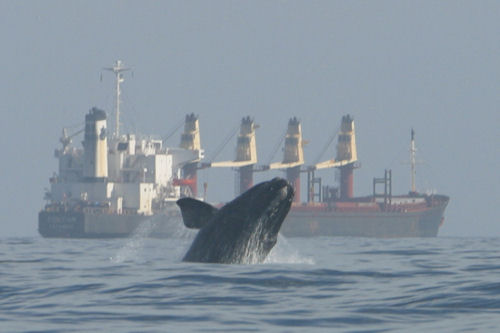 For years we have been blaming the Navy’s electronic sounding equipment used by submarines for the strange beaching of whales and dolphins along the shores of the world. Now a new and more sinister threat . . .vessels using loud seismic blasts from air-guns searching for oil and gas deposits under the sea floor . . . could soon be killing sea life of all kinds on the Atlantic coast.

As these ships move up and down the coast they would blast very loud air guns every 10 seconds, 24 hours a day, non-stop for days and weeks at a time.

The U.S. Department of the Interior delayed possible approval of airgun blasting along the coast from Delaware to Florida this fall after running into intense opposition to the plan by environmental groups like Greenpeace and Oceana.  The department statement issued earlier this year, however, noted that a government study has determined that the blasting will have “minimal impact” on sea life. The airgun blasting could begin next year in an area stretching 400 miles off the coast.

While environmental groups have voiced strong opposition to the blasting, it appears that the Obama Administration is being pressured to approve the project by governors of southern states who say offshore drilling would bring new jobs to the area.

Opponents argue that the destruction of sea life is destined to destroy coastal fishing, tourism and recreational jobs without any assurance that major oil or gas deposits will be found.

The survey ships would be shooting extremely loud blasts of compressed air through the ocean and deep into the seabed to create echos that might help find reserves of gas and oil.
The government is expected to begin to allow off shore drilling along the Atlantic coast in 2017. Environmental groups are fighting this plan as well.

The blasting would cause thousands of whales, dolphins, turtles and other sea life to go deaf, lose their ability to find their direction, and die, according to one draft report. Most sea creatures are extremely sensitive to sounds. Whales are known to “talk” to each other in high frequency sounds that are heard for miles.

Matthew Huelsenbeck, a marine scientist for Oceana, noted that the blasts will sound to the whales like “dynamite going off in your living room every ten seconds for days to weeks at a time.”

Oceana, which is among the groups opposing the blasting, notes on its website that there are only about 450 North Atlantic right whales left today and they live and give birth in the area where the blasting is expected to be done.
​
The quest for new sources of oil appears to be part of a silent economic battle going on between foreign powers that are returning to a gold standard of finance and the United States, which has been operating on an oil standard.