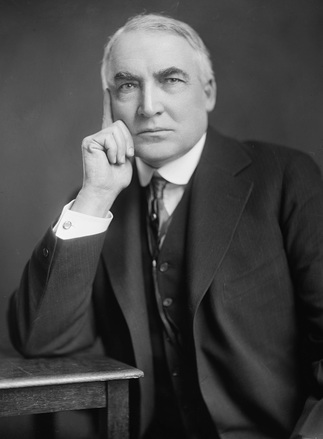 Among the United States presidents to die in office was Warren G. Harding, who dropped dead unexpectedly on Aug. 2, 1923, in the presidential suite of the Palace Hotel, San Francisco. The cause of his death was never really known because his wife, Florence, refused to allow an autopsy.

Thus we have the makings of another conspiracy theory. The problem with trying to pin a conspiracy behind Harding’s death, however, was that he was a 57-year-old man, in poor health, with known heart problems and reportedly a heavy drinker. Also Mr. Harding was a somewhat popular president and after two and one-half years in office and did not appear to have been involved in things that might have led to his assassination.

There was one on-going scandal occurring in Washington at the time. It was the so-called Teapot Dome issue involving a secret leasing of federal oil reserves in Wyoming and California to Mammoth Oil Company and Pan American Petroleum Company. Harding had transferred the supervision of these oil-reserve lands from the Navy to the Department of the Interior. Interior Secretary Albert Fall took the blame but Harding was being investigated for possible wrongdoing at the time of his death.

Mr. Harding also was known for his clandestine love affairs and his consumption of alcohol during prohibition.

Even though an autopsy was denied, the media and general public apparently accepted the official report by then Secretary of Commerce Herbert Hoover that Mr. Harding died of “a stroke of cerebral apoplexy.”

That was a fancy way of saying the president probably died of a stroke or heart attack caused by an unexplained shut-down of his organs.

Books and magazine articles have been published since Harding’s passing that have offered various theories as to what really killed him.

The most controversial accusation came from the book The Strange Death of President Harding, by Gaston Means, a former Harding Administration employee. Means falsely accused Florence Harding of poisoning the president. He also published what were said to have been “tall tales” linking Harding to the Teapot Dome affair and his scandalous love affairs. In the book Means suggested that one of the affairs may have produced an illegitimate child.

Means, however, used a ghostwriter, May Dixon, who later exposed his book as a “pack of lies.” The Means book became a scandal of its own since it was learned that Dixon was angry about never receiving the royalties from the book that she had been promised.

Means later was found out to have been operating as a bootlegger and notorious confidence man who later set up a con related to the Charles Lindbergh Jr. kidnapping. He died serving a term in Leavenworth Prison in 1938.

The other strange part of the Harding death was that he was alone with his wife at the time of his sudden death. That Mrs. Harding refused to allow doctors to conduct an autopsy might also have been a red flag that something was wrong. Instead, she ordered that the president’s body be embalmed as quickly as possible.

Was it possible that Means knew something in this matter? When employed with the president’s staff he worked for the Federal Bureau of Investigation.

Dr. Ray Lyman Wilbur, a leading heart specialist in San Francisco, the president of Stanford University and President of the American Medical Association, got involved in the case. He expressed frustration by Mrs. Harding’s autopsy refusal, not because he suspected foul play, but because of the possible blot on his reputation.

Dr. Wilbur worried that the press and a bereaved public blamed the president’s doctors for incompetence, malpractice and even plots of poisoning the president. “We were accused of being abysmally ignorant, stupid and incompetent,” he said.

So the theorists have since produced four basic possibilities linked to Harding’s death; He died of natural causes, the doctor’s medicines of that day may have caused his death, Harding committed suicide, or Florence killed him.

Indeed, Harding’s regular doctor was Charles Sawyer, described as a “charismatic homeopathic” physician who dosed the president with purgatives, laxatives and injections of heart stimulants including arsenic.
​
Harding was recovering from a bout of cramps, indigestion, fever and shortness of breath, and a week prior to his death he suffered from food poisoning during a cross-country speaking tour. The trip was a preliminary act to his planned re-election campaign. This appears to rule out depression and suicide. Mr. Harding wanted a second term.