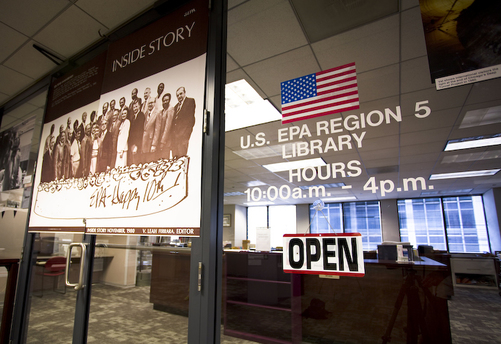 The Environmental Protection Agency, created in 1970 as a national watchdog over the dumping of industrial, commercial and private contaminants in the land, air and waters of the nation, maintained a nationwide network of 27 libraries that contained critical scientific information on human health and environmental protection.

The libraries became a vital database for EPA scientists, researchers and the general public to find accurate, up-to-date scientific information to help make the best scientific determinations concerning the health effects of toxic substances, records of environmental change over time, impacts on specific regions or communities and a variety of other issues. The libraries, centered in key points in the United States, were considered a unique and invaluable source of information about hazardous waste, toxicology and pollution control.

In 2005, the libraries received more than 134,000 database and reference inquiries and distributed nearly 53,000 books, journal articles and other resources to researchers in the field.

The Bush Administration changed all of this in 2007. That was the year Congress approved a budget plan to slash 80 percent of the EPA budget. The decision not only crippled the vital work of the EPA but it gave industries almost free reign to return to old practices of environmental pollution. It also began threatening the shut-down of the EPA library system.

The federal fiscal year begins in October of the previous year so the impact of the Bush budget cuts hit the EPA in the fall of 2006. That month three key libraries in Chicago, Dallas and Kansas City were closed. These three libraries were the largest of them all and served the entire Midwest. Not only were these libraries closed, but they were dismantled and their contents either destroyed or shipped to repositories where they were un-cataloged and inaccessible.
​
The EPA library closings sparked a strong backlash among scientists, environmentalists and members of Congress who opposed the budget cuts. After two years of political in-fighting, some of the libraries were reopened but on a limited basis.

The destruction of documents, however, could not be repaired. Carol Goldberg, associate director for Public Employees for Environmental Responsibility, said the battle left in its wake scattered and incomplete collections that may never be reassembled and less robust services than before.

Goldberg said the reopened libraries are now housed in less space than they originally had, with less available information, and that the Chicago library even lacked permanent furniture and shelving.

A report by the Government Accountability Office found that the destruction of the 37-year-old library network resulted in the loss of documents and information that can never be recovered. Democratic Congressman Bart Gordon, chairman of the House Science and Technology Committee, said the report revealed a "grim picture" of mismanagement at the EPA.

The EPA library system remains in operation, at least for a while. As new federal budget cutting occurs, however, the future of the entire EPA program may be in question. It seems that most Washington legislators are so influenced by the big oil and coal company lobbyists that the world’s greatest issue . . . climate change brought on by a thickening cloud of carbon and methane gas emissions is not very high on their agenda if it is even listed.

George W. Bush, who refused to publicly accept the warnings of the looming effects of the greenhouse effect of the toxic atmosphere, went out of his way with executive orders and budget cuts to rip the teeth out of the Environmental Protection Agency. Bush will undoubtedly go down in history as the worst of environmental criminals. That is if humanity has much of a history left.

Yes Mr. Sprat, the closing of the EPA libraries has been and remains a serious issue of concern.