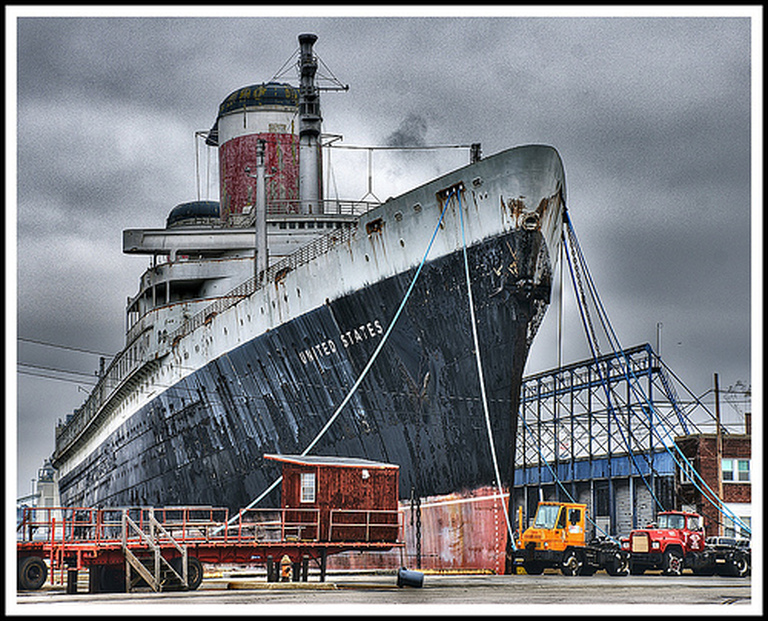 When launched in 1952 the SS United States was among the last and finest luxury passenger liners of its type built for trans-Atlantic passenger and cargo service. With a sleek 990-foot-long all-aluminum hull and powered by four Westinghouse steam turbines driving separate massive propellers, the ship reached speeds of 44 miles per hour thus setting speed records for trans-Atlantic crossings.

The ship had a capacity to carry up to 1,928 passengers in addition to the 900 crew members required to operate it. During the 17 years it remained in service the United States made 800 Atlantic crossings and never had a mishap.

Because it was built to Navy specifications, the United States is heavily compartmentalized with separate engine rooms. The ship’s hull was designed with 183,000 different fabricated sections, thus minimizing the chance of being sunk at sea. To reduce the risk of fire, no flammable material was used in building the ship. Even the furnishings, including the grand piano were made of fire-resistant materials.

Susan Gibbs, executive director of the SS United States Conservancy, the organization that is raising money for preservation of the ship, said her grandfather, William Francis Gibbs, who was instrumental in bringing this vessel to reality, was “absolutely in love” with the United States.

“The Titanic motivated my grandfather that his ship would not succumb to catastrophe,” she said. “You can’t set her on fire, you can’t sink her and you can’t catch her.”

Although late in the game for trans-Atlantic liners, the United States was subsidized by the U. S. government for United States Lines as a possible troop carrier or hospital ship in the event of another great war. Fortunately such a war never happened and improved airline service caused a loss in passengers, thus making what was perhaps the finest ship of its class obsolete before its time.

This great liner has been docked and slowly falling to ruin, mostly at Pier 82 on the Delaware River in Philadelphia since 1996. There have been numerous buyers since the vessel went out of service. Plans included refurbishing the vessel for Caribbean cruises, converting it into a hotel and dining facility, using it as a gambling casino, restoring it as a marine museum, and finally, just scrapping it. All of the plans have fallen through over the years, mostly because of the high cost of storing and maintaining such a mammoth ship.

The dock rent alone is costing the owners $60,000 a month. The estimated cost of restoring the ship is estimated today at over a billion dollars. The Conservatory is working on a deadline of having the ship sold to a New York developer or sold for scrap before the year is out.

The most recent scheme is to create an on-board museum.