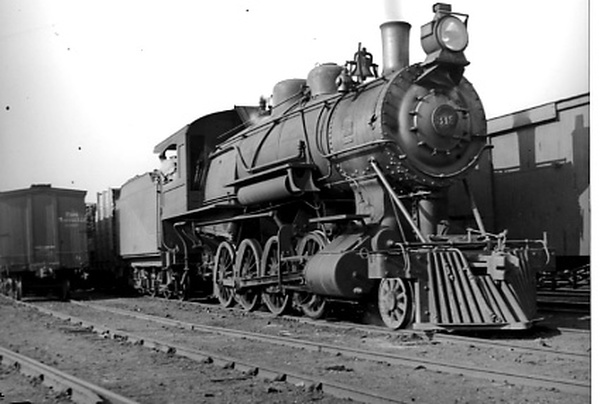 When we lived in Harbor Beach, our house was on a hill that looked down over a golf course. Just beyond the number one fairway was the Pere Marquette Railroad track.

The train, driven by one the last of the old steam locomotives, came into our town every day at about 6 p.m., at about the time my father was getting home from his daily job and my mother was setting the table for dinner. We always knew the train was coming when its whistle sounded as it was approaching the crossing where old US-25 twisted its way out of the city.

Most of the time I liked to watch the engine and its trail of cars rumble past from my second floor bedroom window. In the summer months, when the days were fair, I often slipped out of the front door, followed a time-worn path down the hill, through a cluster of trees, and dashed between golfers across that fairway so I could be up close and wave at the engineer.

Those were the wonderful days when the engine, something in the nature of a moderate 2-5-2, always blew off excess steam as it was slowing. That usually happened at about the time the engine was just passing the golf course caddy shack, so I knew where to safely stand when I got close enough to see the train up close.
​
Like any young boy of that era, I loved trains. I always had an active electric train set in my room. The walls of my bedroom were decorated with wallpaper depicting antique steam engines.

There was one incident that remains vividly sketched in my memory regarding that train. As young boys we often walked along the tracks through the woods to the point where they crossed the highway, and then explored an undeveloped forest from there to the shores of Lake Huron. One day I was with two other boys who began talking about wrecking the train. It was on a dare, I suppose, that we piled some old loose railroad ties and stones on the track, believing that it would cause the engine to go off the track.

That night the train was late coming to town. And I was feeling terrible about what we had done. The last thing I wanted to do was wreck that train. I was so worried that it didn’t take my parents long to realize that something was wrong. Soon I was blurting out the whole story. I am sure my father saw the humor in the thought that a couple stones and an old iron spike would be enough to derail something as heavy as that steam engine. Instead of laughing, however, he took me by my hand and walked with me out along the track until we found our little pile of mischief and removed it.

How glad I was that night when I heard that familiar steam whistle blow at the M-25 Crossing and knew the train was going to arrive safely. What my father did was a strange lesson in love that has remained deeply implanted in my memory all of my life.

My first published article was a short historical piece in a history magazine titled "The Day We Wrecked the Train." It was a detailed recollection of what we did that day, and how my father made it all right.

The Pere Marquette Railway ran trains through Michigan, Ohio, Indiana and into Ontario Canada between 1900 and 1947. The Pere Marquette line merged with the Chesapeake and Ohio Railroad in 1947, the steam engines disappeared, and the diesel powered trains replaced them. It was sad to see those magnificent steamers go.
​
My interest in trains has never wavered. I recognize a need for a good railroad system in our country as a way of moving a lot of people. And I have been appalled to think big business interests, the railroads, and many of our government leaders don’t seem to agree with me.

I believe the railroad has always been a solution to our need for mass transportation and shipping. Rather than clutter our roads with pollution generating cars and trucks we should have followed the example chosen for Europe, China and Japan . . . replacing the old railroad systems with new, high-speed trains and good track to handle the nation’s needs.

The decision to establish the Amtrak system seemed to be like a dream coming true when approved by Congress in 1977. It was late, but I perceived that America’s dream railroad system was finally going to happen.

Instead of evolving into a new railroad system, however, Amtrak became a patched-up continuation of the old, without attracting enough business to ever generate interest in making it better. Over the years I have watched as the Amtrak system has cut more and more services, and communities have torn up more and more precious track.

Many of the old right-of-ways where the tracks once ran have been turned into snowmobile and bike trails. Our railroads are quickly disappearing. I never thought I would live to see the day when the magic would end.

At a time when the high cost of fuel and security are squeezing the airlines, or forcing the cost of travel to such levels it will be available for only the rich, the Bush Administration in 2005 proposed a budget that cut federal subsidies for Amtrak from $1.2 billion to zero.

It seemed that for a while our government refused to do anything to help promote, or build a good passenger system that people want to use. Instead, the emphasis remained on personal automobiles and expensive gas-guzzling trucks that not only add to the nation’s air pollution problem, but help the world race toward an energy crisis of disastrous magnitude.

President Obama, however, promoted green technology and the construction of new high speed rail systems, and efforts to get some projects were launched under the government stimulus program in 2010. But the budget crunch and two wars, plus the Republican/Tea Bagger push to cut federal spending without seeking additional revenues through increased taxes has put a damper on serious high speed rail consideration.

Sarah Jaffe, associate editor of the Huffington Post, recently lamented that there has been reluctance by Republican conservatives to allow high speed rail construction. This, she wrote, is because the Republicans do not want a project like that linked to an Obama legacy. They also oppose anything that would be beneficial and strengthen the nation’s labor movement at a time when there is an all-out effort to break the unions once-and-for-all.

Thus the concept of high speed rail, which would benefit millions, provide jobs, help ease traffic congestion and air pollution, and move large numbers of people quickly between  cities, is being blocked for political reasons.

Instead, the interest has been narrowly focused on big business, the oil and automobile companies, and what was needed to assure profit margins for Wall Street investors. It has not been for the Earth, or the future needs of our children and grandchildren. This may be changing, however. High speed rail systems are being constructed in Europe and Asia and it is only a matter of time before they will be part of the American way of life.

The intense weather conditions that are bringing destructive storms, killer quakes and other natural disasters haven’t put the brakes on the nation’s quest for oil and carbon fuel. The heating planet and the deadly weather changes are forcing dramatic changes in the way we live. It is a shame that we did not foresee this earlier.

As for me, I am overpowered by an intense feeling of sadness as I watch the dismantling of a once magnificent railroad system serving America. When it is gone, and all of the right-of-way converted to local ownership, my fear is that it may never be brought back.