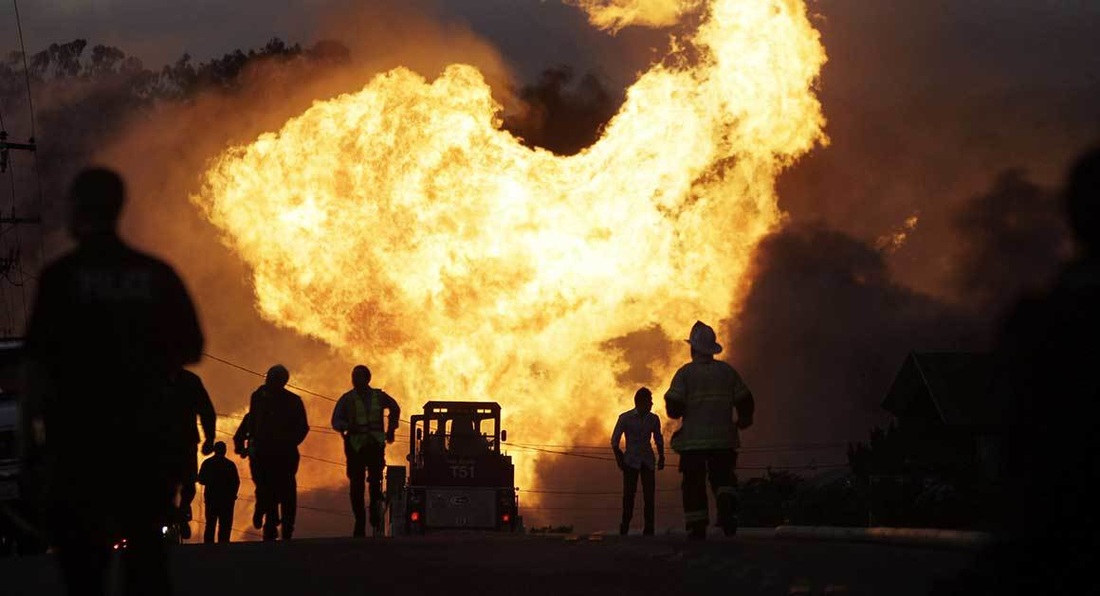 Item number ten on the Jack Sprat list of concerns was "ruptured pipelines." We have heard of a few gas and oil pipeline breaks but until we began researching this issue, we did not realize just how severe this problem has become all over the United States.

So far in 2015 there have been 26 major breaks recorded and resulting in destructive and in some cases deadly spills of crude oil natural gas, propane gas, gasoline and even jet fuel. Often explosion and fires occur, large areas of property and homes are destroyed, towns evacuated and construction workers killed or injured.

So what is causing these breaks, which in most instances cause major local disasters. Some of the breaks, like the Embridge Energy pipeline rupture in 2010 that spilled over 800,000 gallons of oil into the Kalamazoo River near Marshall, Michigan, caused extreme ecological damage.

A fractured Pacific Gas & Electric Co. natural gas line was responsible for an explosion and fire in San Bruno, a suburb of San Francisco, California, in 2010 that killed eight people and destroyed 38 homes. A second break in the same area this year was caused by a construction crew. The problem was contained before it caused another explosion, but numerous homes were evacuated, just in case.

Among the events recorded through August this year:

On January 14 a gas pipeline exploded and burned, near the Ross Barnett Reservoir in Brandon, Mississippi, creating a sizable crater in the ground and burning 6 acres of vegetation, before the fire was extinguished. No injuries were reported.

On January 19, oil from a broken pipeline seeped into the Yellowstone River, and contaminated the water supply 10 miles south of Glendive, Montana. The release was from Bridger Pipeline LLC's 12-inch Poplar line, which can carry 42,000 barrels a day of crude from the Bakken formation and runs from Canada south to Baker, Montana.

On January 26, a 20-inch ATEX pipeline carrying ethane exploded and burned in Brooke County, West Virginia. Despite snow in the area, five acres of woodlands burned, and 24,000 gallons of ethane were consumed.

On February 17, a suspected electrical arc made a hole in a Marathon Petroleum pipeline in Shively, Kentucky, spilling about 6,700 gallons of jet fuel. More than 2,500 tons of soil were removed to clean up the area

On February 25, a 26-inch crude oil pipeline in Navarro County near the Town of Dawson, Texas, failed, spilling about 50 barrels of crude oil. Near the failure, investigation showed that the pipe had lost about 80% of its thickness, due to external corrosion.

A pipeline Patrol pilot identified an oil sheen on a pond near Tehuacana Creek, Texas which was then linked to a leaking 10 inch petroleum products pipeline on March 13. About 50 barrels of diesel fuel were spilled.

On April 9, two Williams Companies pipelines broke within hours of each other in Marshall County, West Virginia. A 4-inch condensate pipeline broke at 8 pm, spilling about 132 barrels of condensate into a creek. About three yours later a 12-inch gas pipeline ruptured. There was no fire or injuries. Heavy rains were said to be the cause of the failures.

On April 13, a Kinder Morgan gas pipeline exploded and burned near Borger, Texas. One home was evacuated, but, there were no injuries or serious damage.

On April 17, a 12-inch natural gas pipeline near Fresno, California operated by Pacific Gas and Electric Corp was ruptured by a backhoe. The resulting explosion killed 1 person and injured 12 others.

On May 19, a Plains All American Pipeline oil pipeline ruptured near Refugio State Beach, spilling about 105,000 gallons of crude oil.

On May 31, a 24-inch natural gas back-up pipeline that runs under the Arkansas River in Little Rock, Arkansas ruptured releasing 3.9 million cubic feet of natural gas. No one was injured. A tugboat was damaged.

On June 10, a 24-inch natural gas pipeline ruptured in Lycoming County, Pennsylvania. About 130 individuals were evacuated from their homes. No injuries or damage reported.
On June 13, a 42-inch gas gathering pipeline exploded and burned near Cuero, Texas. Seven homes were evacuated but there were no injuries.

On June 22, a truck driver was killed when his rig veered off a highway, and broke above ground facilities for a propylene pipeline in Houston, Texas. The highway had to be closed for several hours, until the gas dissipated.

On July 10, a fitting on a 20-inch Plains All American Pipeline crude oil pipeline broke, spilling 4200 gallons of crude oil near Grantfork, Illinois. Much of the crude reached a nearby creek.

On July 15, two workers were hurt by an explosion when a bulldozer hit a 4-inch gas pipeline at an EQT gas compressor station in Worthington, Pennsylvania.
On August 3, two individuals were injured in Falfurrias, Texas when a natural gas pipeline operated by Kinder Morgan ruptured.

On August 7, a natural gas liquids pipeline in Weld County, Colorado burned, after being struck by a third party.

On August 13, a natural gas pipeline in Cypress, Texas ruptured and leaked while a contract crew worked in the area. The pipeline was owned by Gulfsouth Pipeline. There were no injuries or immediate damage; residents were evacuated.

On August 26, two maintenance divers were injured when a pipeline they were working on 25 miles off the coast of Louisiana ruptured and the gas ignited.

A Colonial Pipeline 32 inch main line was discovered to be leaking on September 21, in Centreville, Virginia. At least 7,000 gallons of gasoline were spilled, forcing several nearby businesses to close.

The list of pipeline breaks gets really long if we go back a few years. It is small wonder that so many residents across the United States were opposed to the construction of that controversial Trans-Canada Keystone Pipeline to carry thick, bitumen crude from Canadian shale south across the central United States to the Texas gulf coast.

So what is causing all of these pipeline breaks, explosions and fires? A lot of it is blamed on the aging infrastructure. But many of the breaks occurred on relatively recent pipelines and were obviously the result of poor construction work. And then there has been the problem of new construction work occurring over buried and often unmarked pipelines.

It all appears directly linked to the nation’s growing demand for carbon based fuels and the need for more and more pipelines to move these materials to processing and distribution centers where they can be sold to consumers.
​
Yes Mr. Sprat, you are correct. The increase in pipeline fractures is a growing problem and hidden danger to all of us. Many of us are not aware of dangerous pipelines lying directly under our yards or the roads in front of our homes.