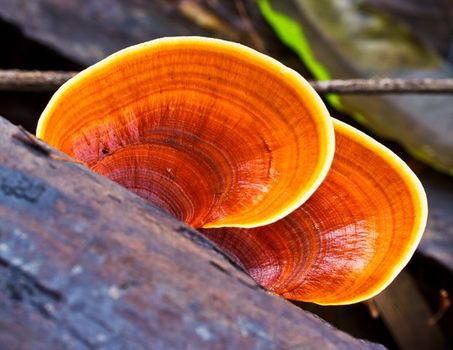 There is a life force that grows everywhere under our feet and even on the floor of the oceans of the world. It is neither plant, animal nor insect; but rather a fungus that quietly dominates the planet. And while we usually pay little attention to it, the fungus family that comes in an incredible variety of shapes and forms is so much a part of our lives it is almost impossible for us to separate ourselves from it.

Medical treatment for a fungus that can attack the human body can be difficult to treat. Black mold that can invade our homes can literally destroy a building making it uninhabitable if not brought under control.

Yet what is amazing about the fungus is that it appears to be so in tune with the humans that researchers have discovered even its DNA is similar to that of humans. It may be more closely related to the human race than we ever would have thought.

The reishi mushroom, or Ganoderma lucidum, is an edible fungus long known by the Chinese for its benefits as a strong anti-inflammatory and a food that helps establish long life. It has long been believed to improve the immune function and bring mental clarity. But are these claims true? Modern research has found that the reishi mushroom indeed brings these benefits and more.

--The reishi is found to be a powerful antioxidant that offers immune-modulating substances that appear to defend DNA and stops cell mutations. Thus is is believed to be an important protection against cancer. The mushroom has been used successfully in fighting cancerous tumors when used in combination with other treatments. It also has been found to make chemotherapy and radiation treatments more effective and helps ease the side effects of those powerful medical treatments.

--Because this mushroom brings a natural balance to hormones it also is being successfully used to lower symptoms of diabetes, fatigue and hormonal imbalance. It also improves fertility and reproductive health. It lowers the number of toxins and heavy metals that accumulate in the body so consumption of the reishi mushroom supplement is found to improve energy levels, bring better concentration and memory and better quality sleep. It can raise hemoglobin levels but not blood sugar levels, thus reducing the complications of type 2 diabetes.

--Because reishi mushrooms improve blood circulation they have been used to help treat various other problems of the human body including sinus infections, respiratory infections, hepatitis, bronchitis and HIV and AIDS viruses.

This mushroom supplement can be purchased in health food stores or many supermarkets, and sold either in pill form or as an herbal tea. The benefits appear to be effective either way. Best of all, we don’t need a doctor’s prescription to buy it. The supplement is not costly. A good woodsman can easily find it just about anywhere in the world.