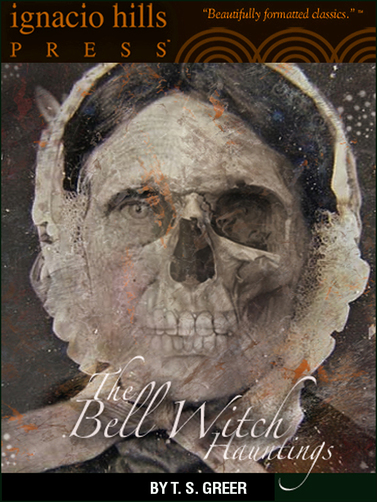 The Infamous Bell Witch Of Tennessee

Books have been written about "Kate," the so-called ghostly witch that haunted the home of John Bell and his family in Tennessee’s Robertson County for four years, between 1817 and 1921.

The haunting began with the usual knocking and odd noises in the house, but then evolved into appearances by various spectral creatures, the appearance of the witch that identified herself as Kate Batts, and then concluded with the strange death of John Bell and the break-up of a romance between Bell’s daughter, Betsy and a neighbor boy, Joshua Gardner.

After that, the ghost was gone. Or at least, it remained quiet except for a single return appearance in 1928.

John Bell moved with his wife and children to the 320-acre farm near the town of Adams along the Red River from North Carolina in 1804. They became members of the Red River Baptist Church and John served as a church deacon. The Bells prospered and lived a peaceful life on that farm for the first 13 years.

Kate the witch made her appearance in the summer of 1817. As the story is told, the family began hearing knocking sounds on the doors and walls. Later there were sounds of a rat gnawing on the bed posts, chains being dragged through the house, stones being dropped on the floors and then vocal sounds of someone choking. There also were visions of strange looking creatures on the farm.

After months of this, Bell confided in a neighbor, James Johnson, who with his wife, accepted an invitation to spend a night in the Bell house to experience the strange goings on. They stayed for several nights, confirming Bell’s story of the haunting. The Johnson’s spread the word, a local group was organized to investigate, and the Bell farm suddenly began attracting people from miles around who wanted to experience the events for themselves.

During its investigation, the special neighborhood committee discovered that the spirit in the house appeared to have a special intelligence. And it was about that time that the spirit began communicating in a voice that only added to the eerie haunting that continued daily without stopping.

The ghost became so well known that General Andrew Jackson came to visit the Bell farm. He not only experienced the antics of the ghost, but had a difficult time leaving because he found his carriage wheels locked until the spirit decided to let him go on his way.

The ghostly tormentor eventually identified herself as the spirit of a deceased local woman named Kate Batts. After this, people spoke of her as Kate the Bell’s Witch. Kate made it known that she wanted to kill John Bell because of a bad business deal she had with Bell over some purchased slaves.

Soon Bell began experiencing a strange illness and he became weaker and weaker. One day he was found unconscious in his bed. They said his breath had a strange smell and his mouth was full of a black inky liquid. Then Bell was dead. Kate’s ghost was heard laughing, cursing and singing in the cemetery as the family and friends were gathered to bury the body.

Kate didn’t leave the Bell home right away. She hung around to torment the family. The daughters had their hair pulled, were pinched, scratched, stuck with pins and even beaten. Her next target seemed to be the youngest daughter, Betsy, who was engaged to a man named Joshua Gardner. The witch never explained why, but she made it clear that she did not want this marriage to occur. Instead, Betsy married a local school teacher, Richard Powell. This seemed to satisfy the witch.

After this, Kate left the family alone. She promised, however, that she would return in seven years. And in 1928 she did return to plague the family again for two weeks. Then she was gone.
​
There is a cave on the Bell farm that has been included in the local mythology. The cave, known as the Bell Witch Cave, is also believed to be haunted. Some believe the spirit of Kate Batts occupies the farm and shelters in that cave. But that is another story.