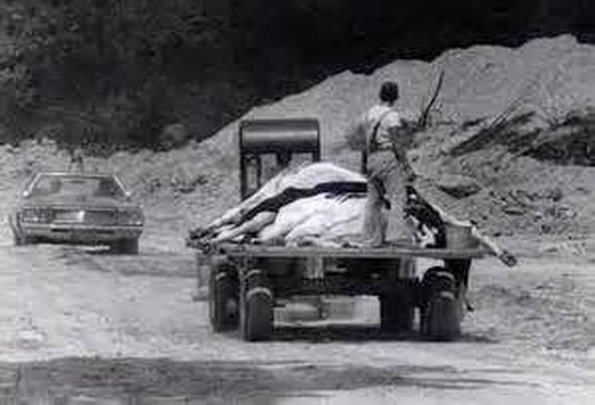 Dairy farming is a major part of the agriculture industry throughout the Thumb Area of Michigan. And it was not long after I began reporting the news in Sanilac County that dairy farmers began dealing with sick and dying cattle. The phenomenon was occurring on nearly all of the large dairy farms in Michigan and veterinarians were mystified.

At first the cows began aborting. They started looking deformed and acting sick. Their coats got mangy and their hoofs overgrew. Experts from the Michigan Department of Agriculture were brought in and they could not determine what was wrong with the cows.

Eventually it was discovered that workers at Michigan Chemical Corporation in St. Louis, Michigan, accidentally mixed the chemical polybrominated biphenyl (PBB), a toxic fire retardant, with the cattle feed that was distributed by the Michigan Farm Bureau to dairy operations throughout the state. By the time this was discovered, an estimated nine million state residents had consumed contaminated meat and milk for at least a year. It was a disaster.

State and federal health officials were at first slow to react, and when they did, they began quarantining every dairy farm that had infected cows. The farmers were unable to sell the milk or slaughter the animals for meat. We suspect many animals, however, were secretly slaughtered and sold for beef at that time before the farms could be quarantined. That may have been one of the reasons reporters had a hard time getting the farmers to talk openly about what was happening on their farms. Cows were slaughtered by the hundreds. Big dairy operations were going bankrupt everywhere. It was a terrible story, one that was hard to report from every front.

We wondered how a mix-up of chemicals like that could occur in a place that was producing cattle feed. And why would a chemical plant that produced a fire retardant have a connection to livestock feed being sold by Farm Bureau?

It turned out that dairy farmers, even as early as 1973, were experimenting with chemical additives in the feed that would make cows produce more milk and thus increase profits. Farming has always been a dog-eat-dog business, complicated by government price controls and farm subsidies, so and profit margins sometimes were measured by the slimmest of degrees. The industry was squeezed into producing as much food as possible and keeping food prices low at the grocery store. This is why the Michigan Chemical Corporation was involved in producing magnesium oxide as a cattle feed additive that was getting mixed in with the Farm Bureau feed.

Some pea-brain at Michigan Chemical Corporation got the bags of magnesium oxide mixed up with bags of the experimental fire retardant called Firemaster BP-6 and you can guess the rest. Investigation revealed that the bags were poorly marked and the job of mixing the chemical with the feed was left with workers that had little job training and no technical knowledge. When one worker noticed that the bags were labeled with the wrong name a supervisor told him it was just a new name for the magnesium oxide and to mix it with the feed anyway.

At first the state established a disposal site in Kalkaska County, in north-central Michigan, and began allowing state agencies to condemn and destroy the poisoned cows. While farmers were not forced to destroy their animals, most farmers did it anyway, since they had no market for either the milk or the beef. For them it was a financial disaster.

In those days little was known as to the effects PBB would have on humans who consumed the meat and drank the milk from the infected cattle. The FDA said low levels of exposure would not be a health threat. Yet PBB began showing up in the breast milk of mothers and breast-fed children began showing signs of abnormal development. The pressure grew to remove all PBB laced food products from the market. The chemical also began showing up in pigs and chickens, and in the eggs produced on farms.  How could this have happened? They discovered that feed for other animals became infected when it was processed through the same machinery.

By the end of 1975, nearly 30,000 cows, 6,000 pigs, 1.5 million chickens, 5 million eggs and 27 tons of dairy products were destroyed. Yet the disaster didn’t stop there. It was found that new cattle brought into the same pens and buildings where the infected cows had been also became infected with PBB contamination. The toxin was in the ground and mixing with the very grass and water the cattle were consuming. Some dairy farmers lost second herds after investing everything they had in starting up again.

At one point a group of farmers marched on Lansing and dumped PBB contaminated cattle carcasses on the capitol steps.

It took years for the PBB mess to be cleaned up. In the end it was determined that every person living in Michigan during that period had the toxin in their bodies. Children born for years afterward also were found to be infected.

While some children suffered mild deformities from the contamination, fortunately the exposure we all took did not seen to have the same effect as it did on the cows.

The Michigan PBB disaster never got much media play, mostly because it involved individual disasters on farms scattered all over the state. Our newspaper worked the story as did a few other newspapers within the state.

The incident should have been recognized as a shot across the bow for agriculturalists that even then, were beginning to experiment with chemical and biological enhancements to produce more product and produce it faster at less cost. Also the farmers were in the first stages of developing what we now know as factory farms.
​
Notice all of the massive recalls of toxic meat and produce that have been occurring since the Michigan PBB issue. Food safety will continue to remain a major problem until we start coming to our senses.