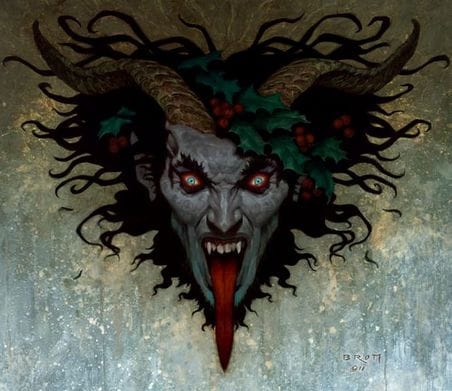 The image of Santa Claus is strongly associated with the bane that a rebellious branch of society and some fundamental Christians have dubbed the “commercialization of Christmas.” But the figure as we know it stems from ancient and spooky mythology that has its origins before the birth of Jesus.

Among the oldest stories of a night visitor during the month of December seems to be that of the Krampus, an evil incubus or demon that comes to punish bad children. The very name of this demon is from Old High German and it means “claw.”

This cruel and frighteningly appearing creature is a German myth that stems from pagan belief systems in the regions of Germany and Austria. After the Santa Claus legend developed, the story changed so that Krampus traveled with Santa. This myth is likely the origin of the story that Santa leaves a lump of coal or no toys at all for bad children.

The description of Krampus as an incubus is disconcerting. An incubus, by legend, is a demonic creature that rapes women in their sleep. The name means to lie on top. Yet the myth of Krampus omits any suggestion of a sexual assault. His purpose is to punish the children who have misbehaved during the year.

Another early visitor to children’s homes at Yule time was Odin, a legend handed down from Iceland. This story depicts Odin as an old man with a long white beard that leads a great hunting party through the sky. He rides an eight-legged horse named Sleipnir that could leap great distances.

When it was time for Odin to visit, children would place their boots filled with carrots, straw or sugar near the chimney for the flying horse to eat. Odin would reward the children for their kindness by leaving gifts and candy.

So now we have a kinder nighttime caller with a long flowing white beard, flying through the sky, and leaving gifts for the children.

The Third Century Christian named Nicholas, provided both the spirit of Christmas gift giving and the root name for the contemporary Santa Claus. Nicholas was a Greek who lived in the village of Patara at what is now at the southern coast of Turkey. His parents, who raised him to be a devout Christian, died when Nicholas was young. In obedience to the command of Christ to “sell what you own and give the money to the poor,” he used his entire inheritance to help the needy, the sick and the suffering.

Because of the way he lived, and his devotion to the church, Nicholas was declared a saint. Thus emerged the name Saint Nicholas, which we all know is just short of the name Santa Claus. But there is more to be told in the evolution of this legend.

It seems that the story of the great deeds of Saint Nicholas spread throughout Europe and it got embellished in the telling as time passed. Thus in the Netherlands, Belgium, Aruba, and other parts of Europe, there evolved a traditional winter celebration of Saint Nicholas eve on December 5 and the morning of December 6, said to have been the birthday of the patron saint of children.

This holiday became and continues to be the chief occasion for gift giving. And there is a magical figure involved who bears the name Sinterklaas, yet another preliminary version of the contemporary name Santa Claus.

Among the traditions of the Netherland holiday was a feast. Also the children put their shoe in front of the fireplace before going to bed, then find gifts around the shows the following morning.

The legends of both Saint Nicholas and Sinterklaas were carried via Christian churches into England where the British character Father Christmas emerged. It was Father Christmas that was portrayed in the well known Charles Dickens classic “A Christmas Carol.” Father Christmas was described as a great genial man in a long green coat lined with fur who expresses the spirit of good cheer at Christmas.

All of these stories followed the European settlers as they migrated to North America and settled there. Because of the influence of the Christian Church, it did not take long for all of the holidays to merge into one, celebrated at Christmas.

Then all it took was the creative writings of such people as Clement Clarke Moore, who penned the poem “A Visit From St. Nicholas” as published in the Troy, New York Sentinel in 1823, to turn Sinterklaas into a jolly old fat elf who rode in a flying sleigh, the flying horse into flying reindeer, and establish the story of how the gifts were brought into the house through the chimney.

After that, song writers, artists and others helped Santa evolve from an elf into a larger than life fat man, added Rudolph the Red Nosed Reindeer to the pack of magical flying team pulling Santa’s sleigh, and gave us that massive catalog of Christmas songs that drive most of us witless by the time the pre-Christmas shopping season comes to an end.
​
While some hard-line fundamentalists worry that encouraging children to believe in Santa Claus might affect their ability to believe in Jesus Christ, it seems there is little that they can do about this. Santa Claus is the most popular of all world myths and the jolly old man in his red coat, white trim and black boots seems to be enjoyed by children all over the world.