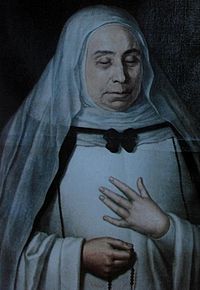 The Spanish Nun That Bi-located

When you consider miracles within the Roman Catholic Church, a Seventeenth Century cloistered nun known as Sister Mary of Jesus in Agreda, Spain, was credited with having converted a tribe of Jarnano Indians in what is now New Mexico to the Christian faith without ever leaving the nunnery in which she lived.

The discovery of this woman’s incredible achievement was made after Father Alonzo de Benavides traveled to New Mexico in 1622 where he encountered tribal people carrying crosses, reciting Roman Catholic rituals, using altars and practicing Catholic liturgy, and all of it in their native tongue.

The Jarnano explained to the priest that they were introduced to Christianity by a beautiful young lady in blue who “came down from the heights to us” and “stayed among us for a time.” They also said that the woman told them that the priest would be coming and that they were to make him welcome. After that, they said she left and never returned.

Father Benavides sent letters to Pope Urban VII and King Philip of Spain asking who had been there before him. The answer was that no one had been sent. He was the first. But how could this be?

Father Benavides knew that the nuns of the Poor Clare order wore blue habits and he suspected that this strange woman in blue might have originated from there. He showed a painting of a Poor Clare nun and showed it to the Jarnanos. They said the dress was right but the woman in the picture was not the one who taught them.

The priest was astounded by the story. He knew that the nuns of Poor Clare were a cloistered order, which meant that from the day they took their vows until their deaths they never left their convents. Thus it would have been impossible for any of them to have traveled to America and worked as missionaries among the tribes. Yet from the story he was told, it appeared that this is exactly what happened.

After returning to Spain, Father Benavides visited the Poor Clare order and conducted a personal investigation. He soon met Mary of Jesus, now the Mother Superior of the convent, who admitted that she was the mystery woman who had converted a tribe of North American Indians, without leaving the convent.

She said she visited the tribe “not in body, but in spirit.” She explained that she would fall into a cataleptic trance and have “dreams” of being in a strange land where she taught the gospel. She said she could not explain how she was able to communicate in the Jarnario language. “I simply spoke to them, and God let us understand one another.”

As proof of her story, Sister Mary gave detailed descriptions of the Jarnario, their general appearance, clothing and customs.